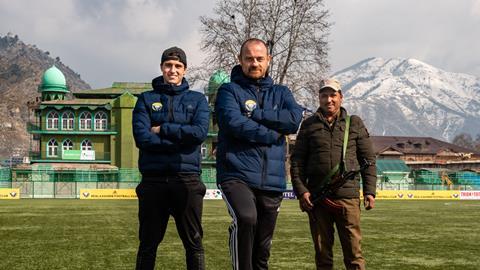 ‘A fantastic way to put BBC Scotland on the map’

“What a fantastic way to put BBC Scotland on the map,” said one judge about the documentary in which ex-Aberdeen and Rangers player Davie Robertson becomes manager of the newly created club Real Kashmir.

Sitting in India’s second division, Real Kashmir FC is located in Srinagar, the largest city in the territory of Jammu and Kashmir, and also in the most militarised zone on earth. As the first documentary of BBC Scotland’s Modern Lives strand, one judge said it “set the bar high” and triumphed by finding its way from a small new strand onto BBC Two.

Real Kashmir FC won Best Single Documentary at the Scottish Baftas and Greg Clark’s film was praised by the Broadcast Digital Awards judges for its beautiful cinematography, great access and editing. “It looks like it was made with a much higher budget than [the £120,000/hour] listed,” said one judge.

A film with football as its backdrop but not a film about football, the documentary very much met the channel’s brief of being outward-looking and focused on people’s lives. It was described by another judge as a beautifully crafted “fish out of water” story that featured fantastic characters in a challenging environment.

Hometown: A Killing, Forest/7Wonder for BBC3

Jesy Nelson: Odd One Out, October Films for BBC3

Joan Armatrading: Me Myself I, Whizz Kid Entertainment for BBC4