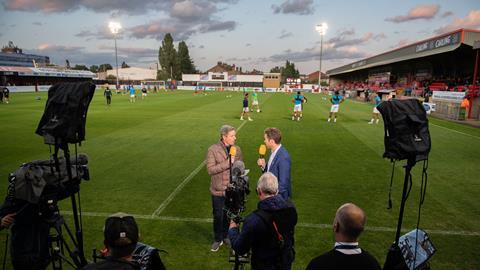 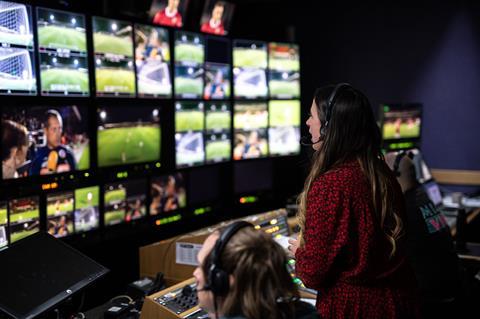 BT Sport is using remote production to dramatically increase its live coverage of the Vanarama National League (the fifth tier of the English football league system) and turnaround highlights from all weekly matches much faster than before.

This season, it will cover 30 National League live games, up from 20 last season, and create a highlights programme featuring every goal from all 11 weekly games. This is done “closer to the final whistle that has been done before on linear live TV,” says BT Sport.

The live presenter-led highlights show for the National League now goes out at 7:30pm each Saturday, whereas previously it was non-live and aired on a Sunday night without a presenter.

BT Sport plans to broadcast one National League game live each week, using a 10-camera setup at the game and with the director and most of the production team at BT Sport’s remote production hub, at its studios in Stratford, London. 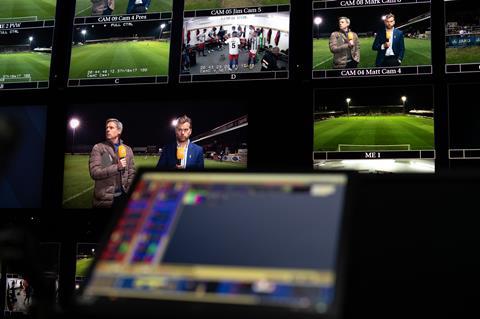 Through 4G remote production (via Mobile Viewpoint 4G transmitters on each camera), the camera feeds are received, vision-mixed and graphics added at the production gallery in Stratford, where live commentary is also added from voice-over booths at the studio.

The gallery is configured to match an OB truck – with positions for the graphics, vision mixer, director and audio mixer – and the game is broadcast live with no discernible difference to the viewer as when the full production crew are at the venue.

For all the other weekly National League games that aren’t covered live, BT Sport covers the game with a single camera in the gantry at the centre of the pitch. Manager and player interviews are covered with the same camera at the end of the game.

Students operate these cameras, which have been supplied by BT Sport to each of the football clubs in the National League. There is no need for an outside broadcast to attend any of the single camera games, and the number of vehicles and personnel sent out for the 10-camera live games is significantly reduced through remote production. 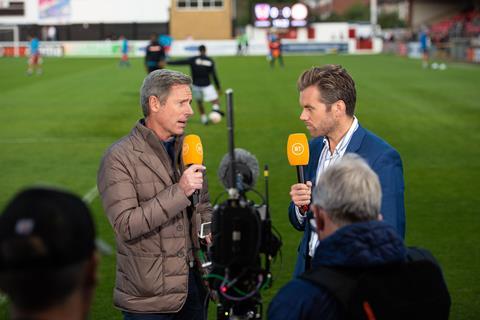 The live feeds from all the single cameras at the different venues all come through to Stratford and a dedicated team look after cutting highlights from the feeds for the highlights show. This is broadcast shortly after the 10-camera live game finishes.

BT Sport chief operating officer, Jamie Hindhaugh said: “4G remote production means we can have a presence at every National League ground and bring all the action into Stratford instantly, as opposed to costly or unrealistic fibre/satellite which isn’t always at these small grounds. Remote production frees up resource to deploy cameras and talent to a wider variety of locations, improving creativity and editorial quality.”

Broadcast Sport was invited to see the remote production on one of the 10-camera games – the Dagenham & Redbridge vs Bromley match on 4 September.

At the venue, presenter Matt Smith told Broadcast Sport: “From my point of view, the foundations of the job are the same, you’re just going to more games. The 4G cameras are more flexible as they enable us to roam around a lot more. There is a short delay with the comms between the venue and the production hub at BT Sport, but we factor this in, and you can easily work around it.”

Each week, Smith presents coverage from the live weekly match and then hosts the highlights show after the live game, from the same ground. He receives highlight clips to his monitor to look at during the game, before he goes on air.

Hindhaugh says: “The benefits of remote production are huge – there are the creative applications of being able to cover more games and highlights from a centralised hub; it offers a much better work/life balance for production staff; it means fewer OB vehicles travelling to games, so has a better environmental impact; and it offers time and cost efficiencies over the traditional production model.”