Serena Kennedy warns that her peers are struggling with mental health

Serena Kennedy, the inaugural Grierson Awards hero of the year, has warned that production management is in crisis. 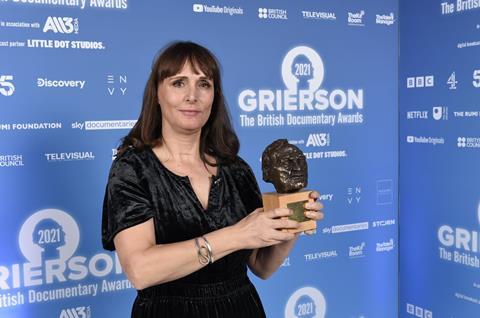 Accepting her award from Adam Wishart, with whom she worked as head of production / line producer on 9/11: Inside the President’s War Room, Kennedy said that conditions must improve if talent is to be retained.

“Production management is in crisis,” she said. “Demand has never been higher, but people are leaving the industry and our mental health is suffering. For some Covid has been the straw that broke the camel’s back.”

Kennedy added that she hopes her accolade can help to usher in a new era.

“Production managers should be properly supported and involved in editorial discussions from the outset. Budgets must accommodate realistic staffing levels and the scope of our role needs to be better understood and training and mentoring is available.”

She echoed calls for “parity of pay” for production managers with their equivalents in the editorial department, following the launch of a campaign earlier this year, and highlighted the role’s gender skew. “Bear in mind that most of us [PMs] are women.”

Thanking the Production Managers Association for supporting her throughout her 25 year career and dedicating her award to all those working in production management, Kennedy urged indies to recognise their “swans”.

“Those key production people who are paddling away beneath the surface, holding your productions in the palms of their hands and instrumental in delivering such wonderful films.”

Kennedy was the subject of a congratulatory video which included messages from Grayson Perry and film director Edgar Wright, and Wishart said that she is his “hero”.

“9/11: Inside The President’s War Room was brutal and relentless – a pandemic, 56 pages of  Covid protocols, 50 weeks and 10,000 miles on the road, 327 graphic elements, robot cameras and an unprecedented co-production deal [with Apple] - it was all orchestrated by Serena, locked down in the West Country,” he said.

“She brought to this film more than managing our fiendish logistics – she made a set of vital, strategic business decisions and it wouldn’t have happened without her.”