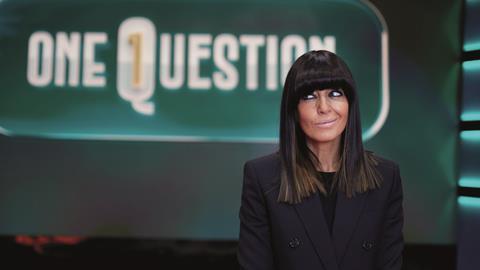 ‘Broadcasters are looking for shows where families at home can play along together, and this has that’

This Chalkboard TV gameshow offers pairs of contestants the opportunity to win £100,000 by answering just one question.

However, things aren’t quite so simple. With 20 possible answers and only one correct choice, contestants must whittle down the incorrect responses over a series of rounds before reaching their final answer to win the grand prize.

The unique concept, which appears highly flexible and scalable, makes it an ideal addition to NBC Universal’s catalogue, according to Ana Langenberg, senior vice-president of format distribution and production at distributor NBC Universal Formats. “It’s really exciting for us to have a UK gameshow, as we don’t have too many in our catalogue,” she says.

Previously, the distributor has picked up British gameshows from in-house indie Monkey, such as Britain’s Best Parent? and The Question Jury, but Monkey has since moved in a different programming direction.

“We know the UK is a great platform for formats,” adds Langenberg, with Chalkboard’s six-part series having already landed a primetime slot on Channel 4.

The format is a departure for Chalkboard, whose entertainment output has previously leaned more towards reality programming, such as Celebrity Fat Fighters and The Extreme Diet Hotel.

One Question is hosted by Claudia Winkleman, with the audience sitting around tables “like an old social club, watching the action centre stage”, according to Langenberg.

The cosy feel adds a point of difference from other titles in the gameshow arena, with contestants sat on sofas as they work through the options displayed on a visual wall.

The game is played over four rounds – ‘Elimination’, ‘Clues’, ‘The Cull’ and ‘The Final Decision’.

In round one, contestants eliminate eight wrong answers, leaving 12. They are then allowed to ‘buy’ clues to help reduce the remaining possible answers to six. However, each clue decreases the jackpot by £10,000.

In the penultimate round, six answers can become three via the host’s invitation for the computer to remove three wrong answers. A final filter – in exchange for half the remaining prize fund – gives contestants the chance to eliminate one wrong option before they are forced to answer the question. “It’s got great playalong value,”

Langenberg says. “Broadcasters are looking for shows where families at home can play along together, and this has that.”

The distributor will predominantly be selling One Question as a format rather than a finished programme, as it lends itself well to adaptation.

NBC Universal Formats holds worldwide rights outside of the UK, Canada and the US. However, Chalkboard’s sibling labels from the iZen Group – Elephant, Imagic TV and iZen Producciones – have the options for France, the Middle East and Spain, respectively.