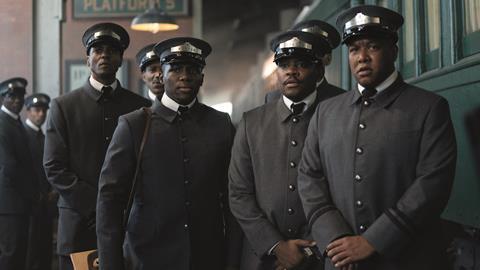 Inspired by real events, The Porter tells the story of the 1920s civil rights movement on the US and Canadian railroads.

The series explores the struggles facing the black community of St. Antoine, Montreal, focusing on two friends working as train porters. Hoping to change the broken system and create better lives for themselves, Junior uses his job to grow a booze smuggling business, while Zeke begins to marshal a movement to unionise the porter class.

Aml Ameen (Kidulthood; I May Destroy You) stars as Junior, opposite Ronnie Rowe Jr (Star Trek: Discovery) as Zeke. Crime boss Queenie is played by Olunike Adeliyi (The Expanse) and Junior’s nurse wife Marlene Massey by Mouna Traoré (In Contempt).

“It’s about black communities striving for empowerment, self-determination, recognition and equality, including the formation of the first black labour union among the porter class,” says Abacus Media Rights managing director Jonathan Ford. “The porter class is a really interesting perspective from which to see the start of a civil rights movement we are still experiencing today.”

It was created and filmed against the backdrop of the Black Lives Matter movement, which Ford believes gives it “even more relevancy”, with people increasingly “clamouring” to understand black history.

“It tells an authentic version of history from the perspective of under-represented communities,” he adds.

“You may have a seen a black porter momentarily in other dramas or films, but stories from these diverse communities have largely been hidden until recent times. It is important to not just repeat the standard versions of history we have always heard if we want to understand the world today.”

He likened the series to the BBC’s period hit Peaky Blinders and Netflix’s post-World War II-set The Defeated, both of which show a “snapshot” of a community within a particular historical period.

“People want to see how different communities have got to where they are and the struggles they have faced,” he says.

Ford adds that the visuals are “very important” to the story. “There is an Upstairs, Downstairs feel, with the porters carrying out backbreaking work on trains that are essentially floating palaces,” he notes.

“The series has an important message that works well for free-TV, but it has the grit and interest that helps it sit in the streamer world too,” adds Ford. “It is also made for a broad range of viewers – anyone who wants to understand the world they live in.”