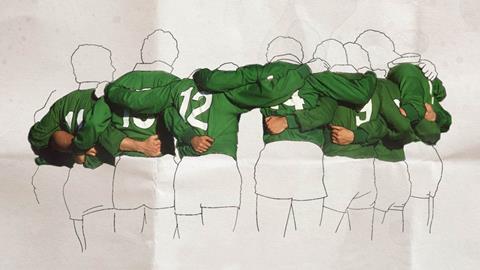 As part of the deal, All3Media’s sports production company North One will become exclusive live rugby co-production partner for 3 Rock.

Similarly, All3Media International will be its exclusive distributor.

3 Rock produced live coverage of the men’s RFU Championships in June 2021 and will also produce ITV’s Gallagher Premiership Rugby highlights programme, which starts on January 30. The company was also behind BT Sport documentary Shoulder to Shoulder (pictured above), which featured O’Driscoll and explored rugby’s unique unifying power in Ireland. 3 Rock is currently in production with After for BT Sport, which lifts the lid on mental health within professional sport when careers come to an end.

The production outfit also creates podcasts, including The Contact Book, in which Doyle talks to sporting stars about the highs and lows of their lives and careers.

All3Media CEO Jane Turton said: “This deal demonstrates how keen we are to build on our existing expertise in both live sports production and sports based factual programming across different platforms. Brian and Craig’s track record in broadcasting, rugby and TV sport is first class and we look forward to working with 3 Rock, adding exciting new talent and content specialism to the All3Media portfolio.”

Brian O’Driscoll and Craig Doyle added: “We are delighted to partner with All3Media to realise our vision and ambition for 3 Rock, which is built on creativity, experience and a talented team. We feel privileged to have the unrivalled expertise and resources of North One, Little Dot Studios and the All3Media Group to help put 3 Rock on the map. High quality sports, factual and entertainment content is at the heart of what we do, and we are now looking forward to bringing that programming to wider audiences.”

Neil Duncanson, MD of North One, said: “I’m thrilled that 3 Rock is joining forces with the All3Media family, but I’m especially excited because we’ll also be teaming up with Craig, who I’ve worked with for many years. He is a hugely talented, ambitious producer and an ideas machine and when you then add Brian O’Driscoll and Keith Doyle - both high quality operators in their own fields - it’s an impressive foundation. The respect these guys have in the industry is immense and I know we’ll have a lot of fun helping to grow the business into something very special.”