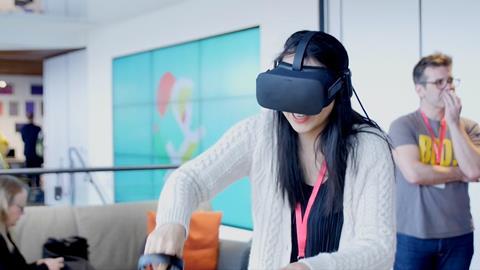 Digital Catapult and Arts Council England are running a two-day event (9-10 October) to showcase 20 prototype immersive projects that have received funding through the CreativeXR programme.

The event is being held at Digital Catapult’s offices in London Kings Cross, and aims to bring together international immersive commissioners, distributors, funders, exhibitors and stakeholders.

Attendees at the CreativeXR Showcase and Market will be “one of the first to experience and immerse themselves in this pioneering content from the programme and beyond,” says Digital Catapult.

The showcase event is taking place in association with the BFI London Film Festival (LFF), and in partnership with StoryFutures Academy: The National Centre for Immersive Storytelling and CreativeXR’s AR and MR partner RYOT Studio.

Jeremy Silver, CEO at Digital Catapult said: “Telling new and compelling stories in new and compelling formats is still an opportunity that virtual, augmented and mixed reality technologies offer. If it were easy to turn these stories into mainstream, popular experiences, then our CreativeXR programme and its accompanying market would not be necessary, but they are. It’s vital that we encourage both the creative talent to pioneer new formats and encourage commissioners to be confident to invest.”

Francis Runacres, executive director, enterprise and innovation at Arts Council England, adds: “These projects provide a valuable insight into the increasing quality and diversity of immersive storytelling across the cultural sector, and we’re proud to present them in partnership with Digital Catapult.”

The 20 projects in the CreativeXR Showcase and Market are: