The work will be finished by Summer and increase the number of stages at the complex from eight to 11 in a bid to grow film and TV production in Bristol and the West of England.

Stages will be clear span build spaces with maximum heights of 34ft, providing productions with adaptable studio accommodation of scale.

Construction specialist ISG has been contracted by Bristol City Council to convert an industrial property at Hawkfield Business Park, half a mile from the main Bottle Yard site, into three new sound stages.

As well as the expansion, The Bottle Yard’s main site will receive a £1.6m investment by Bristol City Council for renewal and repair works.

The investment in the current site and new studio provision is expected to create 135 jobs during the refurbishment with a further 863 jobs created over the next 10 years through an accompanying Workforce Development Programme focused on high-end TV skills and targeting development of new talent in South Bristol.

Dan Norris, Mayor of the West of England said: “The expansion of The Bottle Yard studios sends a strong message that our amazing creative sector here in the West of England is thriving. So many talented people are helping put our region on the national and international map as a go-to location for the film and TV industry. Three new stages will mean even more of our favourite shows like The Outlaws, Poldark and Showtrial can be filmed here. 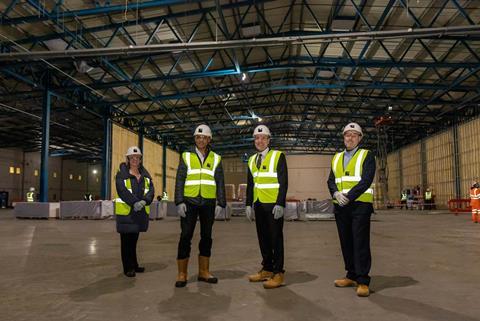 Marvin Rees, Mayor of Bristol, added: “It is great to see the expansion work starting at The Bottle Yard Studios. Our £1.6m investment in the current site, coupled with the additional capacity at the Hawkfield site, once developed, will bring confidence to the city’s film and TV production sector and harness growth as the demand for on-screen content grows worldwide. The expansion will also create jobs, skills and training opportunities, support the local supply chain and be a major boost to our wider regeneration plans for south Bristol, bringing growth and opportunity into the area.”

Laura Aviles, senior film manager for Bristol City Council responsible for The Bottle Yard Studios & Bristol Film Office, says: “This expansion is big news for Bristol’s film and TV sector. Upping The Bottle Yard’s stage count from eight to 11 at a time when space for filming is at a premium, means we can welcome more of the productions we know are keen to film in Bristol, a city that saw a 225% increase in filming in the first quarter of the current financial year.”

Richard Skone, regional director for ISG said: “The sustainable Bottle Yard Studios development will prove transformative to the capacity and capability of the region’s media sector and, during the construction phase, will prioritise positive social value outcomes for local residents and the wider community.”