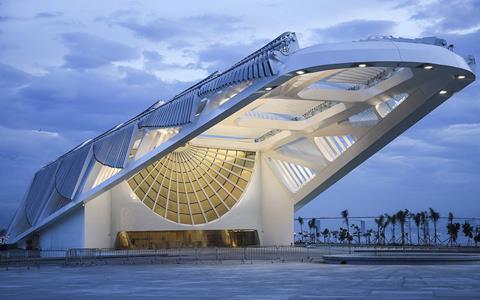 The content is being broadcast as part of an exhibition at the Museu de Amanhã (Museum of Tomorrow) (pictured), Rio de Janeiro’s science museum.

The 8K signal’s journey from Russia to Brazil is a complex one. Here goes… It is transmitted as a 200 Mbps video stream at the International Broadcast Center in Moscow and transported to Tokyo. It is then carried to Intelsat via the Intelsat point of presence in New York. The signal is transmitted on the IntelsatOne terrestrial network to Intelsat’s teleport in Atlanta, Georgia, where it is re-encoded at 90 Mbps using a NTT 8K HEVC real-time encoder.

Once the video is compressed, it is modulated by a Newtec MDM-6100 modem in DVB-S2 and then uplinked to Intelsat 14, the company’s emerging HD video neighborhood in Latin America known for its HD and 4K content distribution.

Intelsat’s Vice President and General Manager, Media said. “While 8K technology is still evolving and further advancements in compression technology standards are needed, Intelsat’s premier video neighborhoods have proven that they are equipped to distribute 8K content to millions of viewers around the world.