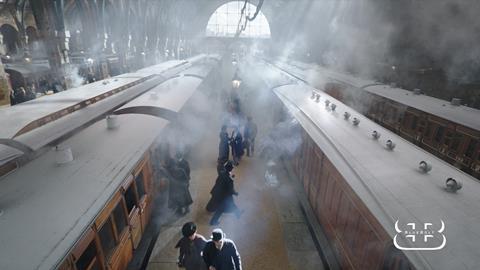 How it was done Howards End is set in England c1900, which required VFX house BlueBolt to turn footage captured in 2017 into authentic images from the period. This meant a vast amount of clean up and set extension, where buildings were removed and replaced with period vehicles and people. BlueBolt said it was “a balance between what the art department could cover up and where VFX took over.”

For example, for one of the scenes in episode two, on the embankment of the Thames, everything except for the parliament building was a matte painting.

BlueBolt’s VFX work across the series included crowd replication in an orchestra scene in episode one, seasonal changes such as in a graveyard scene at the beginning of episode two, and the addition of people walking outside a home, as seen from inside.

In one of the scenes, a character leaves a house and goes to another that appears to be only a street away. In reality, the filming location of the first house was in North London and the other property was in West London. The moments where you see both on screen together, just a street apart, is a VFX composite, with the addition of vehicles and people also added in post.

The images of King Cross in the first episode were shot in a train yard in Uckfield, Sussex. BlueBolt said: ”The enclosure where we shot was limited in its dimensions so there were complexities and challenges to creating the King’s Cross you see in the final edit. Besides a platform and two lines of carriages, the rest of King’s Cross – the trains, station, people, and, lets not forget, the pigeons, were all created in post. VFX supervisor Stuart Bullen was on hand throughout the shoot to ensure every VFX shot was prepared and filmed to meet the needs of Director Hettie Macdonald.”

”The trains were all remodelled and textured in 3D, which was lead by 3D supervisor Nic Birmingham, as was the station, which was modelled from masses of images taken from the time,” adds BlueBolt.

The exterior of King’s Cross when you see a train leaving, took its lead from a painting called Morning rush from King’s Cross, by CJ Allen. Digital matte painting artists created the view from scratch, and the steam train was the only real element in the scene. Each person was shot on a greenscreen, acting out scenes such as running for trains, waving off loved ones, or working on the tracks.

See it Now on BBC iPlayer