Events space reinvents itself as a ‘pop up’ film studio 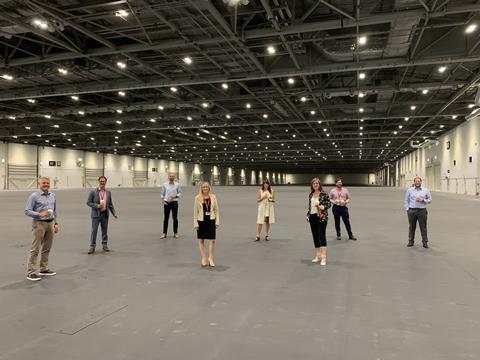 Events venue, ExCel London, is marketing around 1 million sq ft of its space as a studio space for film and TV projects.

The location provides 33ft height to rigging point and has drive-in access.

The space will be available for productions until April next year.

The venue sells itself on being “a safe, contained and highly controllable environment which ticks all the boxes when it comes to current safe filming guidelines put in place by the British Film Commission.”

It is being marketed by Location Collective, which says a “major US studio has already taken space for a well-known show, and a number of further blockbuster features and HETV shows are in discussion.”

James Rees, executive director, ExCeL London, said: “We quickly realised we were in the very unusual position of a perfect storm: we have a large amount of space to offer, space that exactly meets the requirements of an industry who are in need and able to get back to work.

“Of course, we are itching to get back to ‘our day job’, hosting world-leading, organised events but it’s fantastic that a challenge that we face short-term has put us in the privileged position to support another industry going through its own post-lockdown challenges. It’s been a great case study in how we can work collaboratively to reignite our economy.”

Adrian Wootton OBE, chief executive of Film London and the British Film Commission, added: “It’s fantastic to see a venue like ExCeL becoming available to the film industry under such extraordinary circumstances, boosting East London’s hub for production. It demonstrates once again what a great city London is, and always will be, for filming and how versatile and adaptable the city is. Prior to the COVID-19 pandemic, the UK screen industries were enjoying record growth.

“As UK film and TV production safely restarts, I am confident we shall return to those levels, and exceed them, in coming years, playing our part in the capital and country’s recovery. We welcome additional space opening up to further bolster the UK’s world-class studio offer and support economic growth.”

Antony Iredale, managing director, Location Collective, said: “We instantly knew that ExCeL would generate a huge amount of interest; the space ideally fits what our film industry customers are looking for in the current climate. We are fielding a lot of calls from productions who can’t believe this space is available, such is the shortage ordinarily in London, including almost daily enquiries from the US.

“Shows that would conventionally be US based have been looking at how to adapt to London, as the UK is a less turbulent place to shoot right now. The feeling is that producers are leaving no stone unturned to ensure content gets made and shows are produced.”