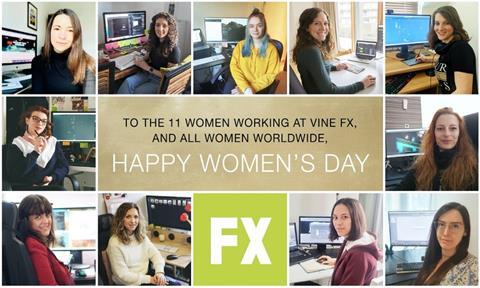 In celebration of International Women’s Day, Vine FX has highlighted 11 females working for the studio.

According to a 2017 survey by UK Screen Alliance, women in the VFX industry make up just 27% of the overall workforce, with the exception of production departments where 60% of the workforce were female.

Vine FX head of production Laura Usaite has been with the company for three years, with credits including Patrick Melrose, War of the Worlds, Black Mirror and Deadwater Fell. She said: “I remember being the first and only female in the company for quite a while before seeing other female applications come through at Vine FX”.

VFX line producer Kaitlyn Beattie is the most recently promoted at Vine FX. She has a Bachelor’s and Master’s degree, focused on film production. Working closely alongside VFX supervisors, she has successfully managed shows such as The Serpent, Soulmates, Viewpoint and The One.

A recent addition to the production team is VFX coordinator, Gabi Kaziukonyte. She gained work experience with Vine FX as a production assistant during the final year of her degree in Film and TV Production. Vine FX then recruited her as VFX coordinator late last year.

At the end of 2020, Vine FX’s editorial department expanded to include VFX editor, Katie Dose. Katie has experience working vendor-side on projects such as Avenue 5, Giri/Haji and The Watch, after a move from client-side where she worked in editorial departments for almost 10 years.

Another recent recruit, albeit not specifically working on the VFX side of the business, is office manager, Leah Chapman, “I am inspired by the work Vine FX achieve with a supportive and collaborative spirit”.

The 2D and 3D departments have experienced growth since Vine FX relocated to Cambridge from London. Compositors Alesja Surubkina and Geri Margules have been collaborating with Vine FX for almost 3 years. Their work tracks back to projects such as Summer of Rockets, Beecham House and the RTS nominated War of the Worlds. Recently they were joined by Laura Sanchez Acosta, who has four years of international experience in 2D compositing and is currently working with Vine FX on the TV mini-series, Viewpoint.

The 3D department expanded through numerous visual effects requirements for War of the Worlds season 2. CG generalist, Amanda Bone was inspired to work in the industry after watching Jurassic Park. She said: “I knew I wanted to either dig up dinosaurs or bring them back to life.” She has a degree in Special Effects Engineering and Design and her favourite projects are ones that involve creating monsters. Another of Vine FX’s CG generalists, Eidy Knowles, took a module in OpenGL whilst studying a degree in Computer Science - opening her eyes to the world of CG. This led Eidy to take a year out from her previous studies to focus on learning 3D, before landing her her first job at Figment Productions. The animation team is joined by Emily Lim, an Escape Studios graduate with past experience on projects such as, The Call of the Wild and Artemis Fowl. She is currently animating the alien robots on War Of The Worlds Season 2.