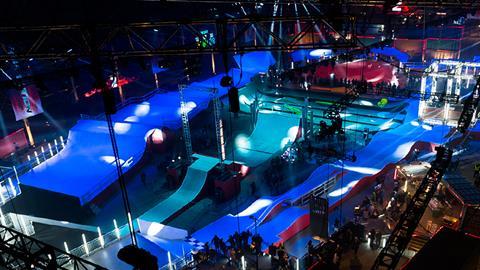 Revolution sees skateboarders, BMXers and skaters race each other on a custom-built course constructed at Cardington Studios, and is filmed in front of a live studio audience.

It’s the UKs largest broadcast entertainment set and was created by scenic designer Dominic Tolfts and art director Ben Telford. Lighting design was by Gurdip Mahal and Ross Williams to add “intense colour and excitement to the mix”.

LED Creative, which specialises in custom-designed LED systems, provided its own compact Sigma 60 LED lights and BYTE Control system to the show to enable the formation of the set.

LED Creative project manager Tim Rees said: “The Revolution installation is absolutely huge; the incredible set design maintains a stunning vibrancy across the entire installation, from the track to the jumps to the interview areas. The team has done a spectacular job with our Sigma system which works really well against such a dynamic set”