Goodbye Kansas Studios contributed more than 229 shots and 20 assets to the show.

Based on the works of Sir Arthur Conan Doyle, and developed by Drama Republic, The Irregulars is a crime drama series that follows the adventures of the Baker Street Irregulars – a group of youths working for Dr Watson saving London from supernatural elements. Serving as the primary visual effects vendor across all eight episodes for the production, the London and Stockholm offices of Goodbye Kansas Studios worked together to contribute more than 229 shots and 20 assets. The team was led by VFX supervisors Joel Lindman (Stockholm) and Jim Parsons (London) in collaboration with overall VFX supervisor, Richard Briscoe.

The majority of the work for the Stockholm branch of Goodbye Kansas Studios centered around the creation of a large flock of around 100 birds that were being supernaturally controlled by the first episode’s antagonist. Not only did the team need to design and create the birds themselves, but they also needed to iterate a multitude of animations for them, place each bird at precise locations within each frame, as well as have the birds perform specific tasks and actions in those moments.

“Creating a flock of birds would usually be an animation task, but because there was a call for sometimes hundreds or even thousands of birds, we had to use FX,” said Filip Orrby, head of FX at Goodbye Kansas Studios. “A large part of the animation on this show was actually made by FX artists controlling the patterns of how the birds fly, but the close-up shots of individual birds in action were done by animators. It was definitely an interesting challenge for the team.” 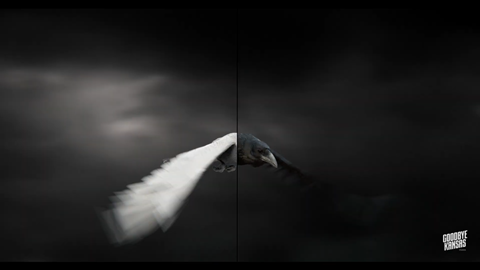 To make this a reality, the team needed to invent an automated rigging system that would allow the birds to move in all the desired ways, while still looking natural. To achieve this, the team had to commit a high level of detail when it came to designing the look of the birds and formulating their actions. The FX and animation teams worked in tandem to design a selection of seven types of birds and provide these creations with individual animation cycles for different speeds and angles of attack. In order to sell the animation, and the story, to the viewing audience, the FX team also put in a high level of previz and blocking work.

“It’s quite a common technique to create the cycles of animation where we had the birds flap around the centre of the scene,” says Joel Lindman, VFX supervisor at GBK Stockholm. “They’re not traversing the scene, they’re just doing their animation in place. Then we had to copy that animation, in this case the birds flapping, onto a simulation of moving points that we could use to control the scene. Each point gets one bird with one specific animation so it looks like a flock, and we added flocking behaviours to those points so they didn’t come too close to each other and instead follow other birds to get the crowd dynamically moving.” 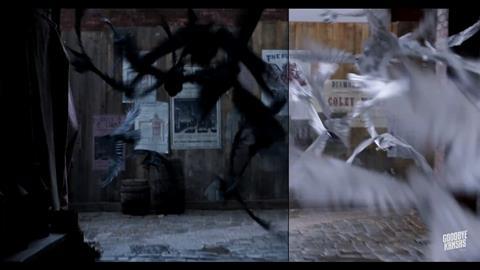 One of the more challenging scenes involved the birds chasing a group of people down a street. The characters were driven to hide in a dilapidated shed made of corrugated metal, which was filmed on set, but the visual effects team at Goodbye Kansas were tasked with simulating the birds attacking and attempting to peck through the thin metal walls. “We had to replace and match up the shed walls in CG and create the effect that some intense destruction had happened to the metal boards from the bird attack. That sort of thing is always the trickiest to execute, especially in real-life so we ended up using CG.”

In the show, and initially unbeknownst to The Irregulars, the birds are under the control of a character called the Bird Master – who they soon discover is capable of creating these birds out of thin air. “The Bird Master’s waist coat is made out of a material that resembles the sheen of swallows,” says Lindman. “We started out by animating swallows taking off and flying out of the actual coat and then 3D morphed the waist coat based on this animation to gradually reveal the swallows”.

For another sequence, the team were required to build a series of set extensions in order to turn the real world filming location of the Palm House conservatory in Sefton Park, Liverpool into the lair of the Bird Master. The top of the glass building – where in the story, the Bird Master kept the babies stolen by his faithful birds – does not exist on top of the real conservatory, so interiors were shot in a studio while the Goodbye Kansas team added in shots of the surrounding locale to make it appear as if it were situated in its version of old London and replacing the top part of the real world location to include the heart of the lair. 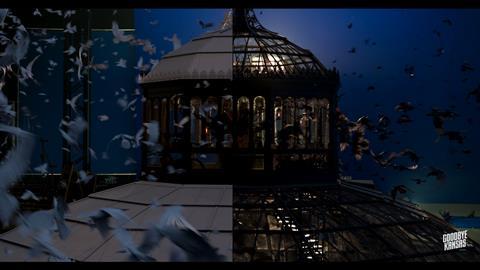 While the team in Stockholm was preoccupied with this flock of vengeful birds, the London office was more focused on more human elements of the VFX. Split over a number of episodes, the majority of tasks for the London team involved touching up various visual elements, including the prominent tattoos that The Baker Street Irregulars are branded with. The art department researched historically accurate tattoos from the period in order to come up with a number of designs that fit the brief and the production eventually selected the tattoo that appears in the series. Goodbye Kansas was then able to add the newly selected designs.

“We have a small art department who did a lot of research into old tattoos from the period that the series is set,” said Jim Parsons, VFX supervisor at Goodbye Kansas London. “In those days tattoos were all done with knives, so we wanted our design to have a more amateur yet still polished feel to it. We wanted the audience to believe that they could have been done by one of these street merchants.”

Another key delivery element was a supernatural healing liquid made from ‘Snowdonia Hawkweed’ that one of the characters uses to put bodies back together. While there was a replacement substance used during filming, the effect of it being applied and absorbed into the skin was always meant to be done in post-production. Both the London and Stockholm offices banded together to deliver this particular aspect of the production, with London helping clean up the skin for the effect and Stockholm handling the look and feel of the healing liquid. 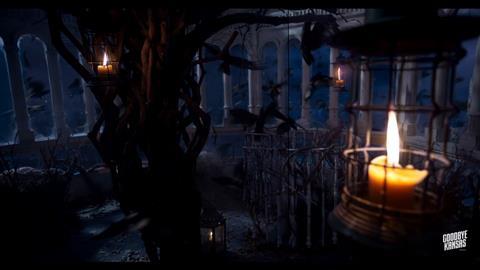 “The task of creating the healing liquid came late in the production, so we had to figure out for ourselves what it would look like,” said Desiree Ryden, VFX producer at Goodbye Kansas London. “It was a very specific, but non-specific brief at the same time. The director didn’t want it to appear supernatural - no smoking, or fizzing - it had to look real. And it was all done over two shots; one where this greenish healing liquid was applied to the skin and another where it was being absorbed. It had to have cleared up by the following shot, as we weren’t doing any FX after that point, so it was a bit of a tricky one to get the timing right, but we got there.”

As with many productions over the last year, the pandemic meant production had to halt and forced everyone involved to work remotely from their homes. Goodbye Kansas Studios had to quickly review and restructure the way it worked, not only with its client, but also between its London and Stockholm offices so that lines of communication weren’t lost.

“From a production point of view, we wanted to ensure that our offices were in sync when we delivered content to the client – that everything came from Goodbye Kansas as one package,” said Ryden. “As with any client in this pandemic, you do get the sense that we’re all in this together which is reassuring. There have been some overall delays because of the pandemic, but we have a great team at Goodbye Kansas, both in-house and on the client side, so for us it’s been a pretty smooth delivery considering the unusual circumstances.”