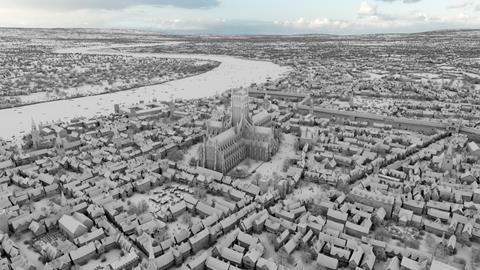 The best recent work, from a recreation of Elizabethan London to deep space

A DISCOVERY OF WITCHES (series two)

Axis Studios created a historically accurate CG Elizabethan London for the second series of the Sky Productions and Bad Wolf drama. The Axis team delivered 100 shots over 10 episodes, working on the production for 18 months, including throughout the pandemic.

The landscape is seen from above in several of the production’s fully CG aerial establishing shots. It is also shown in numerous scenes set inside the city.

Axis’s VFX team used period street maps and illustrations, as well as modern terrain data, to help create the reconstruction. The team then created Maya and Houdini pipelines to automatically populate assets such as people, buildings, courtyards, carts, boats, foliage and fauna across the cityscape, rivers and wharves.

The VFX house’s lighting and rendering department worked to evoke the moody character of Elizabethan London. It created versions of the CG city at different times of day, night and year to ensure that whenever an establishing shot appeared, the cityscape was consistent with A Discovery Of Witches’ storyline and current timescale, and that its tone and appearance matched that of the surrounding scenes in the edit.

For street-level shots, Axis extended in-camera plates filmed on a physical set built outside Cardiff. A Leica BLK360 laser scanner was used to scan the set’s streets, buildings and courtyards. These were then used for pre-vis and to select shot perspectives with CG cameras.

CG supervisor Ross Gilbert says: “Creating A Discovery Of Witches’ Elizabethan London was a case of harmonising the client’s narrative vision with the authentic historical world. The Axis creative team did excellent work: the city was plausible, aesthetically intriguing and furnished a visceral feeling of a post-medieval capital conurbation.”

The Midnight Sky was directed by and stars George Clooney as scientist Augustine Lofthouse, who ventures across the Arctic to warn off a returning spaceship following a global catastrophe.

Framestore delivered almost 500 shots from its studios in London and Montreal, including CG facial replacements; the interplanetary craft, Aether, and its interior; and ominous imagery to imply the idea of a ‘Sick Earth’.

To emulate zero-gravity and enhance the scenes of pregnant astronaut Sully (played by a pregnant Felicity Jones) floating in space, digital face replacements were created for the wide CG shots. 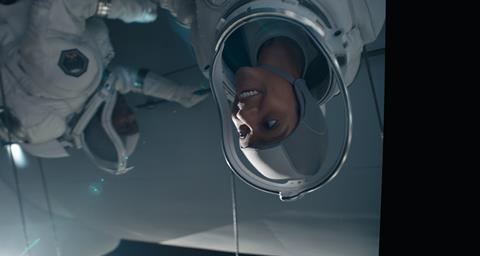 High-resolution Anyma scans were combined with proprietary shaders to create convincing high-res digital faces, which were then keyframe animated.

VFX supervisor Graham Page says: “The Anyma capture gave us an animated mesh of the actor that you can use to drive animation, but there’s a lot of clean-up work for that to be usable, especially around the eyes and the mouth.”

Animation supervisor Max Solomon adds: “The head motion and eyelines were adjusted to work with specific actions and the position of the camera.In som e shots, it was quite nuanced, enhancing eye darts and blinks, while in others, we made broader changes to head angles and eyelines.”

The Aether ship was designed by JimBissell (who was production designer onE.T. T he Extra-Terrestrial), with the support of art director Jonathan Opgenhaffen.

Using parts of the International SpaceStation , existing Nasa technology and 3D printer technology, the team were able to focus on the details and texture of the ship to make it look realistic.

Augustine’s shoot on Earth took place in Iceland, with 70mph winds and freezing temperatures. “Unfortunately, when they went to shoot the plates, a lot of the snow had melted, so we had to replace it,” says VFX Supervisor Shawn Hillier.

“So we really had the opportunity to push our snow shaders further to hold up in all of the close-up shots of the snow moving across the surface of the ground, with the light scattered through it.”

Fate: The Winx Saga follows the coming-of-age journey of five fairies attending Alfea, a magical boarding school in the Otherworld.

The key characters take their powers from water, fire, earth and lightning, and the development of chief protagonist Bloom’s power over fire is central to the narrative and visual effects.

Cinesite’s team also created the mysterious and sinister creatures, called the Burned Ones, that attack the students. Other effects in the series include showing the students’ growing mastery over their powers, from growing plants to conjuring light sources, manipulating floating water spheres and weaponising static electricity. 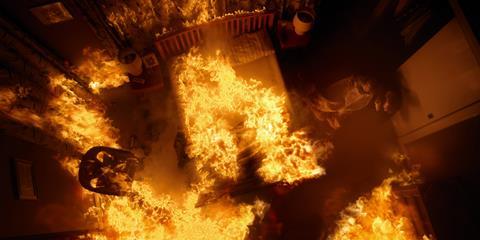 BIRDS OF A FEATHER - WE GOTTA GET OUT OF THIS PLACE

Jump design worked on a VFX shot for the Christmas Special of Birds Of A Feather, where a photo of a house was turned into a camera move on a 3D house covered in Christmas lights and decorations. 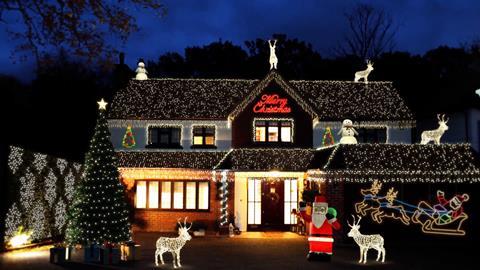 Jump technical director Russell Mann says: “We only had a still of the house, but the client wanted the camera to pull out. We knew that would give away that it was a flat image, and also make placing the 3D Christmas elements awkward, so we projected the picture of the house on some basic geometry. As long as it was viewed from a similar angle, this made the house 3D again. It also gave us proper space to place the 3D Christmas elements and lights, and somewhere for shadows to fall.”

The graphics had a very quick turnaround time, with this shot produced in two days.

The one-off episode reunites Tracey (Linda Robson) and Dorien (Lesley Joseph) as they navigate the lockdown caused by the global pandemic.

The comedic drama, set in 18th century Russia, required VFX to give the production an authentic, period feel.

BlueBolt, led by VFX supervisor Henry Badgett and VFX producer Sam Dubery, was tasked with creating large-scale environment extensions, including adding the Royal Palace of Caserta in Italy to plates shot in the UK, and military camp extensions for the Russian Front. 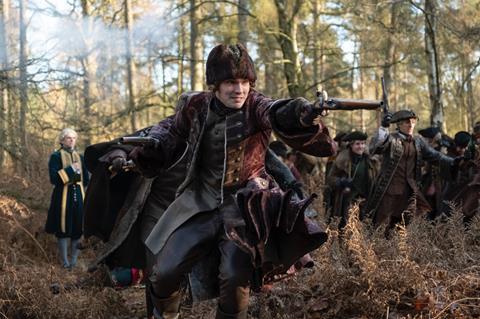 The BlueBolt team was also tasked with creating a kaleidoscope of CG butterflies for two episodes, as well as extensive VFX detail in a fight sequence.

To ensure key sequences for VFX were shot efficiently and the required data captured for post-production, the on-set team lead by VFX supervisor Rob Delicata was required throughout the six-month shoot at locations including Hatfield House and Wrest Park, as well as on location at the Royal Palace of Caserta itself, in Naples.

BlueBolt started the post-production process in October 2019 and delivered the series during the first Covid-19 lockdown in April 2020.