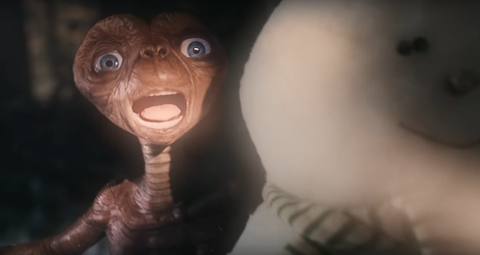 Sky and Comcast have created a joint US/UK TV campaign that centres on ET and his friend Elliott. The spot was originally developed for Comcast by LA-based creative agency Goodby Silverstein & Partners and transitioned into a collaboration with Sky’s in-house agency Sky Creative Agency.

Creatives from Sky Creative Agnecy flew out to the shoot in Canada to assist with the creation of the advert, which sees the original actor who played Elliott (Henry Thomas) now grown up and with his own family. His children find ET in the garden where he’s reunited with Elliott and they catch up on some of the key tech changes that have happened in the last 30+ years. ET then heads off back home once more.

Sky Creative Agency executive creative director, advertising, Robin Garton, told Broadcast: ”This is the first time we have put TV, broadband and mobile in the same ad. The challenge is to produce advertising that people want to watch – with ET we’ve done exactly that. This is the first example of Sky and Comcast producing advertising together. Given the conversations we’ve been having, I expect more of that will follow.”