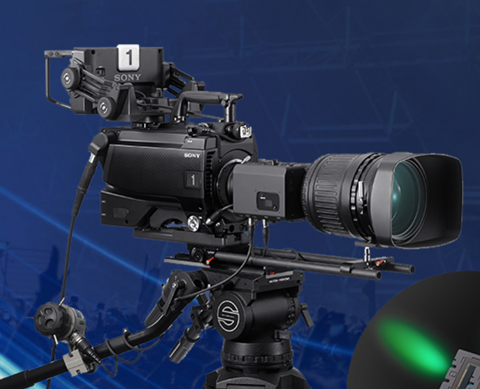 Sony has unveiled an 8K system camera, the UHC-8300, surprising crowds of tech journalists swarming around its stand at the RAI Amsterdam at the beginning of IBC 2017.

It left the announcement until mid-way through its IBC press conference, casually announcing the details before lifting a black silk blanket off the camera to unveil what looks like a huge beast of a machine.

Sony developed the UHC-8300 with input on the product specification given by NHK, Japan’s public broadcaster.

Sony was also keen to get across the 8K camera’s credentials for 4K productions, with real time cut outs from the 8K picture to a 4K image providing flexible framing when capturing live action.

Accessories for Sony’s HDC series of system cameras, such as the viewfinders and the remote-control panels, are also compatible with the UHC-8300.

The camera has a 1.25-inch lens mount, but can also accommodate B4 mount 4K lenses with a lens adaptor.

“This camera is all about giving our customers complete choice,” said Richard Scott. “They have the capability to capture and deliver content with the resolution and range that’s right for each production.”

The UHC-8300 will be ready for orders to be placed from next month.