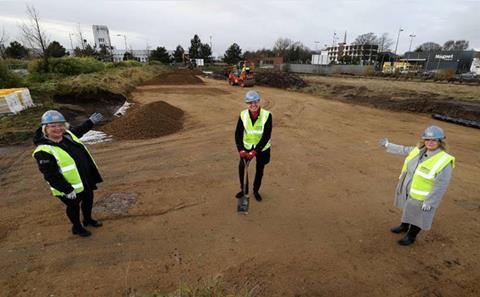 Work has begun on what will be Liverpool’s first purpose-built film studios.

Two 20,000 sq ft sound studios will be created on the land, and are expected to be operational by spring of this year, with work being overseen by Liverpool City Council’s Film Office.

The Film Office is the first of the kind, with the city one of the UK’s major filming destinations. 212 productions were hosted in 2020, despite the Covid-19 crisis, with 670 filming days.

This project is taking place next to the currently derelict Littlewoods building, which is being turned into a film and TV production hub by Capital&Centric. Twickenham Studios will be an anchor tenant at Littlewoods Film Studios, which gained a £17 million funding commitment from Liverpool City Council earlier this year.

Acting Mayor of Liverpool, councillor Wendy Simon, said of breaking ground: “Liverpool’s film and TV sector has flourished in the past decade and these purpose built sound stages symbolise how far the city has come as one of Europe’s leading go-to locations.

“Being adjacent to the future Littlewoods Film Studios, these high-end facilities means the city will be able to provide the industry with a complete support package and I can’t wait to see them welcoming their first productions.

“There’s already a huge amount of interest to book these studios, which underlines their value, but they will also prove to be a fabulous asset for training and nurturing talent in Liverpool.”