“Watching TV through flimsy cardboard glasses has never been a satisfying experience.” Read on for the verdict on last night’s TV. 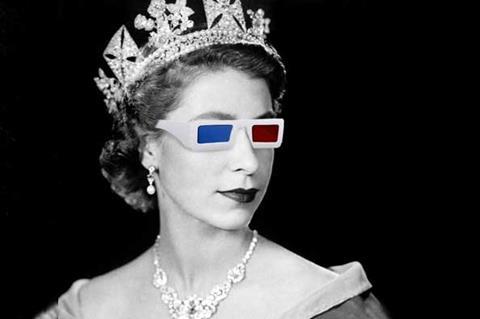 “It was moving to see how London transformed itself from a post-war bombsite into a party scene. Moving, too, and not a little sad, to see the love with which our monarchy was once viewed, and soon wouldn’t be. The only let-down was the 3D.”
Matt Baylis, Daily Express

“The 3D was curiously flat, like a series of cut-outs one behind the other, the colour was mostly red and the footage was mostly horses.”
Tim Dowling, The Guardian

“Watching online (sometimes the reviewer’s lot), I felt a bit as I did when Derren Brown told me he was going to fix me to my chair: nothing much seemed to be happening. But when the golden coach rolled down the Mall, very effective the 3D was.”
Andrew Billen, The Times

“The footage was illuminating enough, casting the Queen in a flattering light and providing a crisp alternative to the BBC’s grainy, monochrome newsreel. But watching TV through flimsy cardboard glasses has never been a satisfying experience.”
Simon Usborne, The Independent

“Who knew the brains behind Noddy and the Famous Five was such as massive, well, bitch… The sober biopic barely touched on racism but it was unsparing in its portrayal of Blyton as a selfish, deluded, vindictive egomaniac.”
Simon Usborne, The Independent

“A riveting portrait of the author; Helena Bonham Carter was icy and unhinged by turns, while still giving you a sense of what people must have found enthralling about Blyton.”
Tim Dowling, The Guardian

“Remarkably, we did not end up hating Blyton as we hated Fanny Cradock in BBC4’s cruder Fear of Fanny three years ago… This was a first-rate start to BBC4’s short season of the nation’s female icons.”
Andrew Billen, The Times

The Art On Your Wall With Sue Perkins, BBC2

“In the hands of another set of TV producers, this could have been an opportunity for the comedian, writer and broadcaster to engage in a series of DIY disasters, as the nation yawned. Instead, we got a surprisingly good look at popular tastes in pictures, paintings and the like.”
Matt Baylis, Daily Express

I’m a Celebrity… Get Me Out of Here, ITV1

“I missed last night, not because it went out too late to make this paper, but because I’d watched it on Sunday night – and that was enough.”
Simon Usborne, The Independent