Bounty Hunters; Man Down; Army: Behind The New Frontlines

“It’s the old oddball couple formula, but it feels fresh because the cast is so strong.” 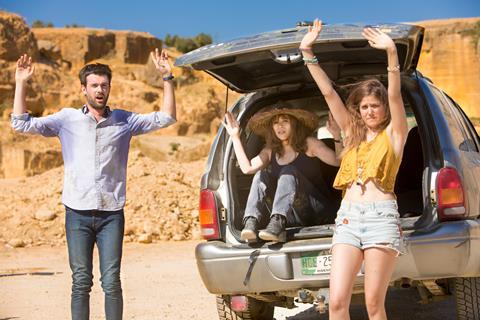 “Laugh-out-loud moments weren’t plentiful in Bounty Hunters, but it amused in a more gentle, low-key way. It’s the old oddball couple formula, but it feels fresh because the cast is so strong.”
Carol Midgley, The Times

“The knockabout action flitted back and forth across the Atlantic and cracked along at a fair lick, punctuated with bursts of cartoonish violence. Eclectic gags flew thick and fast – but the show’s not-so-secret weapon was Rosie Perez. Her chalk-and-cordite double act with Whitehall lent the otherwise derivative Bounty Hunters its charm.”
Michael Hogan, The Telegraph

“Bounty Hunters is good on the neuroses of the English upper-middle-class male. What it is not so good at is authentically depicting any other kind of human. The criminals all come off like Danny Dyer misremembering scenes from the Lavender Hill Mob.”
Ellen E Jones, The Guardian

“There’s a crazed, self-pitying Basil Fawltyish energy to Dan, who also faintly evokes Ronnie Corbett in an episode of Sorry! gone very dark. But I enjoyed it so much I immediately watched the next two episodes.
Carol Midgley, The Times

“Man Down is steeped in the history of TV comedy. The trouble is, it tries to pay homage to every genre — and the result is a slapdash jumble that can’t decide where to earn its laughs.
Christopher Stevens, Daily Mail

“Man Down is on seres four and still packing in the gags and the grotesques. All the characters, however incidental, are fully realised and often gifted with the best (read: filthiest) lines.”
Ellen E Jones, The Guardian

Army: Behind The New Frontlines, BBC2

“The strength of this documentary is that nobody had to preach or rant. The cameras simply looked on. Sometimes it was dull, sometimes blood-curdling.”
Christopher Stevens, Daily Mail

“Alongside the clever strategies, the obvious point was that Russia presents a mounting threat to the West. We also don’t have the soldiers to see it off.”
Matt Baylis, Daily Express

“This should probably be viewed as a mercy on Marvel’s part. Just when the responsibility of keeping up with an entire cinematic universe begins to overwhelm, they put out an eminently missable addition.”
Ellen E Jones, The Guardian