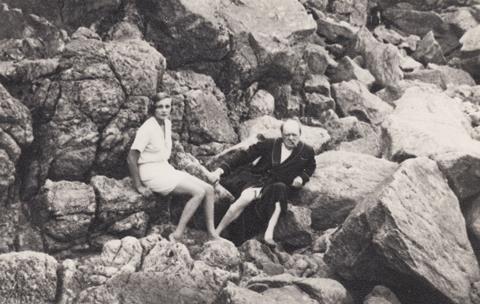 “Although it lacked a definitive smoking gun it was a juicy documentary made juicier by eye-popping footage of Churchill going backwards down a slide into the sea in budgie-smuggler trunks.”
Carol Midgley, The Times

“With Darkest Hour in the spotlight for Oscars weekend, Churchill’s Secret Affair was an interesting look at a lesser-known period in his life.”
Jeff Robson, The i

“The documentary told the story in an enthralling yet sensitive way.”
Claudia Connell, Daily Mail

“Like the movie trailer that gives away the beginning, middle and, for good measure, the ending too, by the time Churchill’s Secret Affair was broadcast we all knew that Churchill had had an affair: it was no longer secret. Shorn, therefore, of any shock value or newer news, the programme had to busk it. It was a potentially good documentary that had been fatally undermined.”
Benji Wilson, The Telegraph

“If Churchill’s Secret Affair contained any surprises, they were of the subtle kind. ‘Powerful white man has affair’ is not the kind of headline that stops the world turning.”
Matt Baylis, Daily Express

“I am a fan of the Strike series, and Tom Burke and Holliday Grainger’s individual performances were their strongest yet. But the producers’ desire to fast-forward the action meant that it became a soup of names and nasty characters whom we had barely got to know before everything was wrapped up nicely. I haven’t read the book, but it was obvious that much of the nuance and motivation had been blunted.”
Carol Midgley, The Times

All Together Now, BBC1

“To the show’s credit, the sob stories were kept to a minimum, there were no promises of a recording contract or Christmas No 1 and the trophy presentation was all over in 10 seconds. It’s almost as if they knew Michael will never be heard of again. Perhaps it should have been called All Together … Now Go Away.”
Claudia Connell, Daily Mail