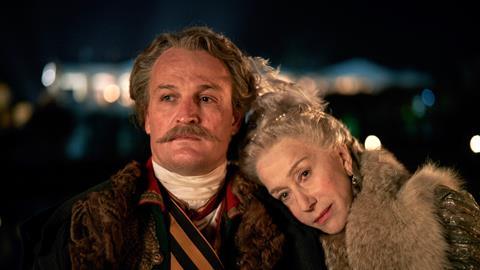 The four-part limited series for HBO and Sky Atlantic was produced through All3Media-owned New Pictures and Origin Pictures (Death Comes To Pemberley) and is directed by The Crown’s Philip Martin.

Penned by Nigel Williams, writer of Channel 4/HBO drama Elizabeth I, with Helen Mirren and Chappaquiddick actor Jason Clarke in the lead roles, the series starts towards the end of Catherine’s life and charts the love that grows between them.

Unable to marry and famously promiscuous, the pair develop a unique and devoted relationship, overcoming their adversaries, claiming the Crimea and shaping Russia as we know it today.

The series also focuses on characters in Catherine’s life who are not so well-known, with the supporting cast including Gina McKee (Bodyguard), who plays Countess Bruce, a lifelong friend and confidante, and Rory Kinnear (Brexit: The Uncivil War) as Minister Panin, a politician and key advisor.

Sky Vision director of drama and comedy Jason Simms describes the drama as “a bookend to Williams’ Elizabeth I – an interesting mirror to another strong woman in a man’s world who wielded supreme power”.

“Some of the things she does to keep Russia safe may test viewers. She wasn’t ruthless but she did have to make some tough decisions,” he adds.

From a first look at the show – shot on location in St Petersburg and Lithuania – Simms calls the series “opulent and sumptuous” with plenty of set pieces, from battle scenes to court settings.

“It looks incredible – the architecture, the costumes. The ambition and scale of the production are as huge as the set pieces,” he adds.

The series is being executive produced by David M Thompson for Origin and Charlie Pattinson and Christine Healy for New Pictures.

With release set for later this year, the show will air on HBO in the US and Sky Atlantic in the UK and Ireland, Italy, Germany, Austria and Spain. Sky Vision will distribute the series internationally, excluding the European territories where it airs on Sky.

Simms believes it will perform well in all territories and hopes to receive interest from premium pay-TV services and SVoD platforms.

“It’s an authentic and respectful period drama featuring actors at the top of their game, so we expect it will play well everywhere,” he adds. “It will be interesting to see how it’s received in Russia.”