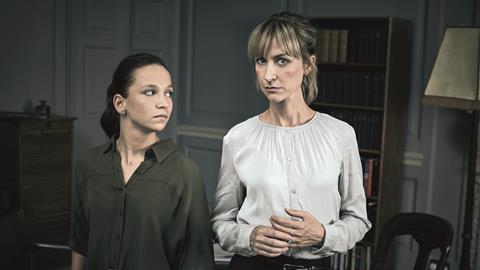 “Four-part series work well internationally, and we recognised the broad appeal of this story”

Brothers Harry and Jack Williams, the minds behind The Missing, Rellik and Baptiste on the BBC and ITV’s Liar and Strangers, have produced another suspense spectacle in this Louise Hooper-directed four-parter, which aired on ITV in March.

This sets up a malevolent competition between the pair, all the while foreshadowing the eventual death of Leah’s husband Adam (Tom Goodman-Hill).

Cheat comes from screenwriting newcomer Gaby Hull, who says he was inspired by a true story. The Williams brothers, who are exec producers, helped him structure the thriller.

“This was my first thing, so I had a lot to learn,” he says. “The idea started as a 90-minute film idea and they helped me turn it into a four-part thriller – showing me how to get that tone and keep it exciting; how to hook people in straight away and manage that line between the heightened style and keeping it grounded.”

Given All3Media-owned Two Brothers’ previous successes, Cheat was a natural fit for distributor All3Media International in its style, cast and form, according to Caroline Stephenson, senior vice-president of EMEA North.

“Four-part series work particularly well internationally, and we recognised the broad appeal of this story,” she says. “The exceptional script, cast, clever plot and the producing and directing talent, gave us all the assurance we needed.”

Stephenson believes being a female-led production gives Cheat an edge in the international market, with buyers seeking shows with “strong female characters” as well as the staple of “suspenseful, character-led drama”.

Cheat has already been presold to several European territories, including Germany, France, Sweden, Finland and Norway, and launches in Cannes with global appetite whetted, Stephenson says.

She is targeting a range of linear and digital buyers. “Strong stories like Cheat deserve to reach as broad an audience as possible,” she adds.

“All3 series such as The Widow, Liar, Fleabag and Mrs Wilson have shown us where these stories can best find their audience – and as always, this requires a bespoke approach.”