1
Hot Picks: The Faces Of History 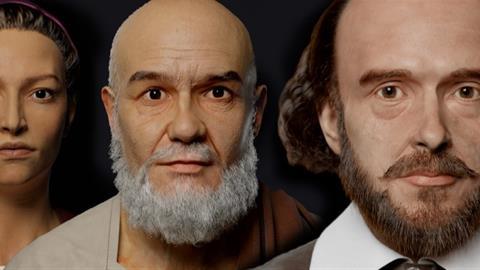 Hot Picks: The Faces Of History

‘When Cleopatra looks into the camera, you get goosebumps. At that moment, she’s not an abstract figure’

Major historical figures from Cleopatra to Shakespeare have been depicted on screen countless times over the years, but a new factual format aims to get under the skin of their personalities as never before.

Amsterdam-based producer Posvideo adopted a similar approach to its The Secret Of A Master Painter format, in which a specialist team tries to reconstruct famous paintings.

Each episode of The Faces Of History brings a scientist or historian together with 3D artist Mao Lin Liao and an actor to put flesh and blood on historical icons including Joan of Arc, Marco Polo, St Nicholas and Mary Magdalene, in an attempt to recreate their look and behaviour.

“Re-imagining what a house, city or historical artefact may have looked like is a staple of specialist factual, but we are wondering what certain famous people would have looked like and asking, ‘Do we really know them?” says Marc Pos, series producer and owner of Posvideo.

Pos says the three-person team “act as detectives to investigate the personal stories of these figures” and unearth new evidence in the part history doc, part travel series. An actor journeys to visit key historical locations to learn more about the individuals, supported by a historian who supplies research and clues. Working from their feedback, Lin Liao then builds a reconstruction of the historical person in digital 3D.

Casting the actor to host, rather than have a celebrity presenter, is important since it is the actor’s unique skills in understanding the psychology of the subject that helps the team draw a personality profile. Each programme ends with a ‘reveal’ of the detectives’ work.

“When Cleopatra looks into the camera at you, you get goosebumps,” says Pos. “She may have lived 2,000 years ago, but at that moment, she’s not an abstract figure.”

The Faces Of History was originally commissioned and broadcast on Dutch public broadcaster NPO and featured actor Derek de Lint (The Legend Of Redbad). Posvideo produces in co-operation with local indie IDTV, for which Pos also serves as chief exec.

Both parties were responsible for social experiment format The Traitors, which is being adapted by Studio Lambert separately for the BBC and NBC Universal.

Pos says the innumerable collection of historical icons makes the format broad and accessible for buyers, and easy to localise.

The series does not dramatise the reconstructed person or attempt to give them a voice, says Pos.

“Our roots are in history, science and archaeology,” he adds. “You can discuss whether Mary Magdalene really existed – but that’s not the focus of the show. We have reliable sources for how the average woman living in Bethlehem and Nazareth around the time of the birth of Christ will have looked.”