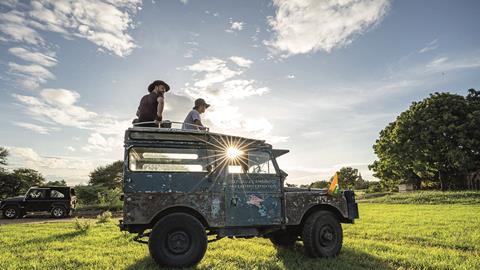 In 1955, a young BBC TV producer called David Attenborough joined an expedition in which six young men drove a Land Rover 19,000 miles overland from London to Singapore. Over the best part of a year, the six adventurers made their way across countries including Turkey, Syria, Iraq, Iran and Afghanistan. On their return, Attenborough made a documentary about the journey for BBC2.

In a recent celebration of the series, the natural history icon remarked that the journey probably “couldn’t be made again today”. That inspired one of the original team, Tim Slessor, to try to prove him wrong. Now in his eighties, Slessor pulled together the funding and a new band of adventurers to attempt a repeat of the expedition – though this time in reverse, from Singapore to London.

Unfortunately, Slessor was ill in 2019 and couldn’t participate. But the mission went ahead with his blessing, led by Alex Bescoby. The resultant 111-day, 23-country road trip is the subject of The Last Overland, a four-part history doc-cum-travelogue produced by Grammar Productions.

EOne vice-president of acquisitions Kate Cundall says one of the most remarkable things about the new journey is that it used the same car that “the first overlanders” set off in. The 65-year-old vehicle had been rusting away on the island of Saint Helena before it was repatriated to the UK and repaired by Land Rover enthusiast Adam Bennett. “So many people along the way wanted to learn more about the car,” says Cundall.

In terms of the journey, she says Bescoby’s team generally stuck to the same route but had to redirect through parts of China and central Asia before “reconnecting with the original route around Turkey”.

At first sight, the series seems tailor-made for a male-oriented audience, but Cundall says it goes broader. “There is jeopardy and adventure,” she notes. “For example, when they are scrambling to get visas into Tibet. But what makes The Last Overland really compelling for viewers is the social history. It’s about comparing the world now with what it would have been like back in 1955.”

That comparison is aided by the “use of sequences from the original documentary”, edited into the updated series.

Cundall says there is also an interesting sub-plot in that Slessor’s place was taken by Nat, his 21-yearold grandson. “Nat is not an experienced adventurer, so you get an interesting dynamic as he comes to terms with what the journey involves.”

The filming was primarily handled by the expedition team itself, which benefited from having a couple of established film-makers on board: Léopold Belanger and David Israeli. Land Rover and The Singapore Tourism Board provided the first injection of funding for the doc. “All 4 came on board for the UK, about the same time eOne took rest-of-world rights,” adds Cundall.

Bescoby’s team had the good fortune of finishing the expedition before Covid struck, and the series is now in final edit. Cundall says it will be perfect for viewers who have been unable to participate in their own adventures because of Covid.