1
Hot Picks: Drag Me Out 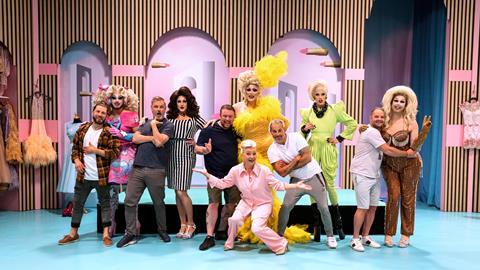 Hot Picks: Drag Me Out

‘Drag culture offers colour, energy, fun and escapism – all things that we can never have enough of’

Drag has become a TV staple, moving from the margins to the mainstream thanks to successful formats such as Ru Paul’s Drag Race and We’re Here, and dramas like Pose.

The latest drag entertainment format vying for TV buyers’ attention is Drag Me Out, which is being sold by Banijay Rights.

The format launched during Copenhagen Pride earlier this year, as a two-part pilot produced by Mastiff for TV 2 Zulu, and is now being sold for adaptation internationally.

In the show, famous drag artists compete to create fabulous personas for well-known celebrities – with one artist leaving each episode, culminating in the final show, where the winner is crowned.

To win, the mentors must not only dress their celebrity but help them to push their personal boundaries by competing in lip sync battles, comedy performances, dance shows and more.

One of the factors that sets Drag Me Out apart, says Banijay global head of content development James Townley, is that it focuses on the personal talent development of the celebrities as much as the outfits.

“It’s a totally equal playing field, as none of the well-known faces has any experience of what it takes to be the ultimate drag sensation,” he says.

Drag Me Out is not just about glitter and fun, though. Throughout the show, friendships develop between the celebrities and their drag mentors, with personal stories shared and emotional discoveries made. “This creates warm, uplifting and endearing stories as the duo support each other to learn and improve together,” says Townley.

The format challenges celebrities in a fresh way, testing their talent while taking them on an emotional journey, he adds.

But he thinks there is a real opportunity for a longer format adaptation to scale up the transformations and performances – and allow for stronger bonds to develop between the artists and the celebrities. “The bigger the better,” Townley adds.

Mastiff Denmark is part of Banijay, and the format was developed and financed with support from the super-indie’s content fund, which aims to create hits of the future.

It adds to several non-scripted formats celebrating LGBTQ+ culture to which Banijay holds the rights, including Metronome Denmark’s Fabulous Dad –a fact-ent series in which the fathers of drag queens try to understand the lives of their sons by performing as drag queens themselves.

Townley says Drag Me Out could work on any linear, digital channel or streaming platform. Not only did it perform well on the TV 2 Zulu linear channel, but the catch-up figures were strong too, “highlighting how well such a format could work for a streamer”.

The art of drag is becoming more and more popular with broad, mainstream audiences internationally, he says, and Drag Me Out has multi-generational appeal for the whole family.

“Drag culture lends itself to huge amounts of colour, energy, fun and escapism – all things that we can never have enough of, especially in the current climate,” he concludes.