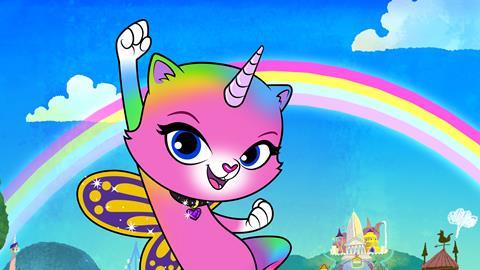 Rumour has it that Rainbow Butterfly Unicorn Kitty creator Rich Magallanes tasked himself with coming up with a title for his whimsical 2D animation that only kids would be able to master.

Fortunately for the rest of us, toy and entertainment company Funrise’s first foray into TV animation has officially been abbreviated to RBUK.

The series, aimed at six to 11 year-olds, stars Felicity, a spirited magical kitty who is part-rainbow, part-butterfly and part-unicorn, as she goes on adventures in the mash-up city of Mythlandia.

Billed as a series that explores ‘female empowerment and nonconformity in each episode’, Felicity can shoot glowsticks from her paws, lasers from her horn, brighten things up in rainbow-mode and clap thunderously with her butterfly wings.

Other characters include best friend Miguel, a straight-talking Chihuahua who’s into heavy metal, Athena, a book-smart owl, and Yana the ditzy yeti.

RBUK launched on Nickelodeon US in January, with the series rolling out on Nickelodeon’s international channels and branded blocks across 170-plus countries and territories later this year.

Jetpack chief executive Dominic Gardiner admits it’s a “complicated arrangement”, but says working with Nick on a launch plan and spotting windowing options for the property was “a great opportunity”.

“We’re a small distributor and like to take on projects outside the norm. The value for us is in working with big companies because we can mould our deal terms around them. We also have to be precise in terms of where we place it,” he says.

Gardiner adds that key territories for Jetpack will include Germany, France and Canada (where it’s not airing on Nick). He is also looking for a free-to-air partner in the UK.

The opportunity to work directly with a toy company making its first move into animation is a valuable experience, he adds.

“Toys and TV opportunities from the get-go are really where the market is at, and we can provide these companies with distribution expertise,” he says.

It’s clear that there’s a lot of affection for RBUK in-house at Nick, with execs commenting that it’s one of the funniest shows they’ve worked on. Viewers seem to think so too, with the series enjoying strong ratings in the first five weeks.

According to Gardiner, Nick initially wanted to launch it on its main channel and then strip it daily on its dedicated animation network Nicktoons. However, the broadcaster decided to leave it on ‘big Nick’ after its strong debut performance.

RBUK currently airs in the US on Sunday mornings and is beating Disney in its 11.30am timeslot.

“Nick is really happy,” Gardiner notes. “It is exceeding expectations”.