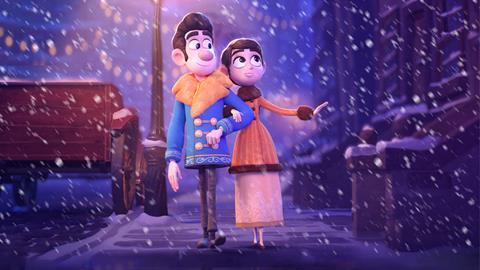 “The Overcoat is a timeless story about how, in a material world, love can conquer everything”

Hoho Rights has big ambitions for The Overcoat – it wants the half-hour animation of Nikolai Gogol’s classic Russian folk tale to play in a Christmas Day slot on key broadcasters around the world.

The Overcoat takes the form of a bedtime story told by a grandfather to his young granddaughter in 1930s New York. The story centres on a lonely office worker, Alaky, in 19th Century Russia who saves up to buy a coat at Christmas, only for fate to make a ghostly intervention.

“Even though this is based on a Russian folk tale, it’s a timeless story about how, in a material world, love can conquer everything,” says Howells.

The film has two distinct animation styles: 1930s New York is classically hand-drawn and looks almost Disney-esque, while 1800s St Petersburg is portrayed with more modern CG/stop-motion techniques. The former was crafted by co-producer A Film Estonia, while the latter was produced out of Ireland by Giant.

“From a visual perspective, we were challenged with creating a style for both the real world of the grandfather and the story world of Alaky,” explains co-director Mullen.

“We wanted the audience to see the world as imagined by the girl as the grandfather tells his story – almost like toys in a tiny world playing out on a stage just for her.”

Howells says she had been tracking The Overcoat for more than 18 months, after meeting with Giant to discuss its development slate, and stresses that it is a family film, and not just for kids.

As such, Howells is aiming to pitch the film to drama buyers. The film is already being considered by key UK broadcasters, and has had a run in cinemas in Estonia.

One factor that may make The Overcoat stand out is that there are few half-hour animation specials made any more, given the financial resources, time and effort required.

Most animation houses prefer to make longer-running series, which are more cost-effective to produce. As such, the animation may pique buyer interest at Mip TV.