Kidding; A Hotel for the Super Rich & Famous; Inside the Foreign Office

“For all those who preferred the US version of The Office to the original it will do very nicely indeed.” 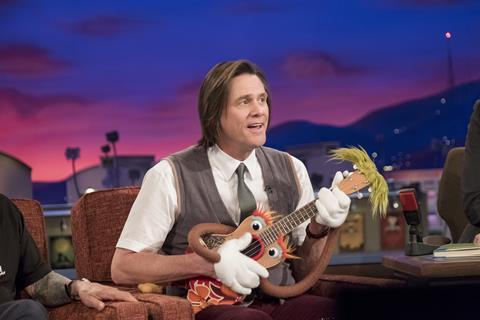 “This can’t be the triumphant return to the small screen Carrey was hoping for. But for all those who preferred the US version of The Office to the original – a legitimate and popular choice – or who don’t understand how Fairytale of New York can be a nationally beloved Christmas song, it will do very nicely indeed.”
Lucy Mangan, The Guardian

“I took a while to warm to Kidding. I like dark comedy very much, but initially feared that this would be too anaemic and meandering. But then we saw that little girl’s male music teacher secretly pleasuring the girl’s father and things looked up.”
Carol Migley, The Times

“The central tension of the show – this entertainer is behaving dysfunctionally, and people around him find it weird – was jarring. Many of the jokes in Dave Holstein’s script also ended up falling flat. Still, there’s time for that to change, especially if Carrey is given the freedom to be himself.”
Lucy Jones, The Telegraph

“I’m sure all those involved in Kidding imagined Carrey’s casting would make the show masterfully self-referential. In fact, it just feeds into the sense of weary deja vu inspired by the whole enterprise. There’s nothing inherently wrong with telling a story about the trials and tribulations of a suburban white guy. But given all the fascinating new perspectives TV is throwing up at the moment, you have to do your damned-ness to answer the question: why?”
Hugh Montgomery, The i

A Hotel for the Super Rich & Famous, BBC1

“The trials of London’s wealthiest oligarchs and sheikhs were exposed in A Hotel For The Super-Rich And Famous, a documentary so camp it should have been saved for Christmas and mounted on top of the tree in Trafalgar Square.”
Christopher Stevens, Daily Mail

“At a time when such efforts are under intense scrutiny thanks to the cases of Matthew Hedges and Nazanin Zaghari-Ratcliffe, jailed on trumped-up charges in the UAE and Iran, it served as a useful insight into the complexities of the job. It has been an enlightening and insightful series by a director who, at first, looked an odd fit.”
Gabriel Tate, The Telegraph