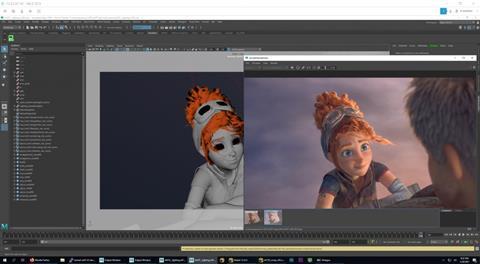 Amazon Web Services (AWS) has unveiled Amazon Nimble Studio, which enables VFX studios to be spun-up or expanded on-demand with “elasticity that gives them near limitless scale and access to rendering on demand.”

There are no upfront fees or commitments to use Amazon Nimble Studio – customers pay only for the underlying AWS services used.

Amazon Nimble Studios aims to replace, or at least supplement, local high-performance workstations connected to shared file storage systems that have typically been used by VFX and animation houses.

AWS says a typical animated feature film now generates 730 terabytes of data and up to half a billion files, requiring more than 150 million core compute hours and coordination from hundreds of artists and engineers. It argues it’s more convenient, timely and cost-effective to utilise on-demand cloud solutions that can be spun-up for the duration of each project, rather than invest in more and more on-premise workstations to cater for demand.

Kyle Roche, head of content production tech, AWS, said: “Amazon Nimble Studio is going to change the way customers produce content using a cloud-based production pipeline. To date, studios struggle to keep up with the ever-increasing demand for creative content, which has driven an exponential increase in the computing power required to produce content—hastening obsolescence of workstations and straining on-premises storage and rendering capacity.”

AWS has also announced AWS for Media & Entertainment, an initiative that makes it easier for industry customers to discover, implement, and deploy purpose-built AWS capabilities and partner solutions for their highest priority workloads.