Music composition company Mcasso has spent £250,000 overhauling its Soho audio studios. The long-established facility has started afresh with all its rooms. Its flagship Studio One now includes an Avid S3 control surface with a specially designed oak desk that incorporates a built-in music keyboard. 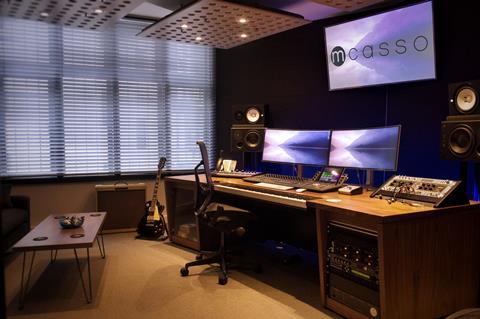 The S3 will also be used in Studio Two, with Total Mix software used as an alternative for when the S3 isn’t needed.

As part of the renovation, Mcasso has added a third music composition and audio mixing room, as well as refurbishing its office and admin areas. It has also refitted its large vocal booth, which is linked to two of its audio rooms. Upgrading all the rooms and creating the additional suite took three months.

The refresh follows the signing of a new lease on its Great Marlborough Street office, within metres of the Carnaby Street Arch, where it has been based since 2003. The company first opened on Carnaby Street itself back in 1981.

The redesigned studios have a number of original features designed by AKA Design’s Guy Wilson, including the full-size MIDI keyboard in Studio One that is built into the desk. When the keyboard isn’t in use, a cover fits flush with the surface of the unit to enable the full desk space to be used.

Each studio has two LG curved monitors and a large LG TV, with audio playback from Yamaha and Dynaudio speakers.

The studios are predominantly used for music composition and sound design work by Mcasso’s team of in-house composers, and for recording character voices on radio dramas and voiceovers for radio, advertising, television and feature film clients.

Following the renovation, Mcasso plans to increase the amount of audio post-production work it does.

“First and foremost, we’re composers, but audio post has always been part of our service,” Mcasso chief executive Mike Connaris told Broadcast. “We have many clients who come to us for audio post, mixing, sound effects and sound design, as well as to source music from our extensive library. Our composers, by the very nature of their profession, are experienced audio mix engineers.”

Mcasso recently composed the titles and incidental music for BBC1’s Let It Shine. Among the first clients to use the revamped facilities are BBC London and BBC Sheffield, which have used it to record voiceovers.