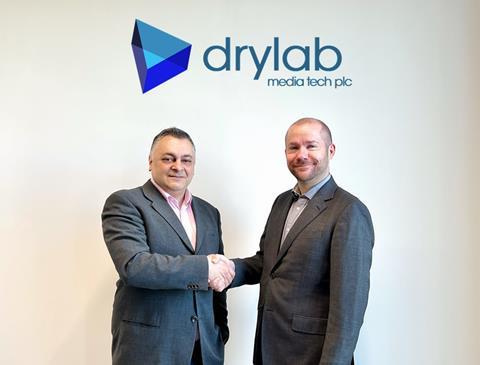 The Scandinavian company offers solutions such as reviewing and sharing of filmed takes (dailies) in real-time during production and post-production, uploading filmed takes with linked metadata to a cloud-based platform, and distrubition of captured media on location - with the platform designed to work without internet access as well as with.

Drylab is used in over 90% of productions in Scandinavia, and has been used in high-end productions such as George Clooney’s Catch-22 and 2022 Oscar-nominated film The Worst Person in the World.

Meanwhile, Media Tech SPAC was formed with the aim of acquiring companies in the media and tech space, and includes executives and senior management who worked together at Warner Bros and have held senior positions at other big studios including Universal and Paramount Pictures.

In addition, Media Tech recruited Justin Lanchbury as its senior VP of sales in January. Lanchbury was head of film sales at Molinare for over a decade until 2017, and almost three years as global sales director at Final Frame until 2020.

Mahtani said: “We are pleased to have come to this agreement with Drylab. John, Audun and Stein have built a world-beating production platform that I wish we had in our early days. The efficiency gains by using such a digital platform would have made our lives easier. The global film and video market is on a significant growth trajectory having reached a value of nearly $234.9 billion in 2020 and expected to reach $318.2 billion by 2025 and $410.6 billion by 2030. We hope to use our network to access markets Drylab haven’t been able to and look forward to reporting on our progress in due course.”

Audun Vaaler, CEO & CTO of Drylab A/S, added: “Drylab was founded by filmmakers to develop systems and technology to assist our own filmmaking. We believe we offer solutions that are not offered as a package by anyone else. This mainly paper-based industry of ours is ripe for disruption and we are delighted to join MTS, which will enable us to leverage their unparalleled network and reach new geographies. We look forward to working with them in achieving this vision together.”