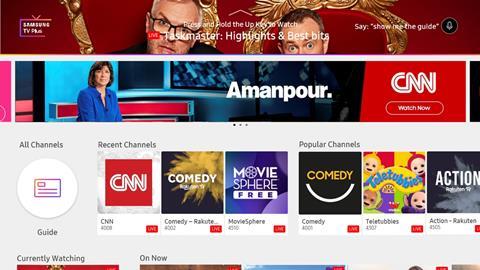 Rakuten TV has expanded its AVOD service by adding CNN International to its offering on Samsung TV Plus.

The CNN International feed provides news and features content 24 hours a day, and will be available in the UK and Germany. It will be added to the TV Plus app on smart TV devices from Samsung Electronics from 2016 onwards.

CNN joins a number of themed channels that have been on the service to date: Action, Comedy, Drama, Spotlight; as well as Rakuten Viki and Euronews. It is expected that further integrations will be made in the future.

Rakuten Advertising hopes to target finance and business professionals with this new offering, and will offer access to inventory on the CNN presence on Samsung TV Plus to CNN clients.

CEO and founder at Rakuten TV, Jacinto Roca, said: “The on-demand industries are ripe for innovation, and by opening the door for business brands to get in front of hard-to-reach audiences, Rakuten TV is leading from the front.”

Phil Nelson, chief operating officer at CNN International, added: “Making CNN International available via the Rakuten TV platform provides news consumers in the UK and Germany with a new way to access our content, as well as advertisers with another platform through which to engage with those audiences.”