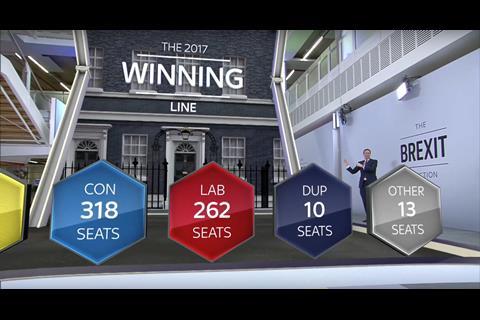 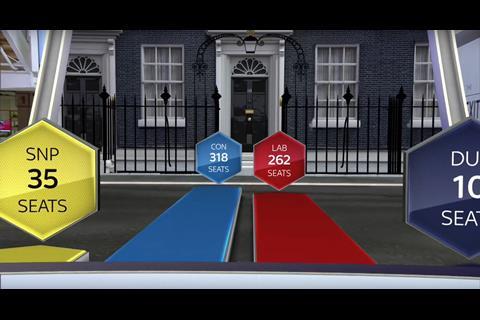 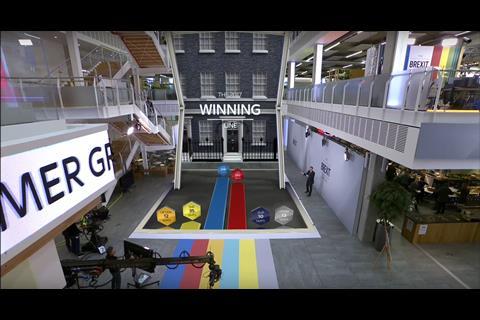 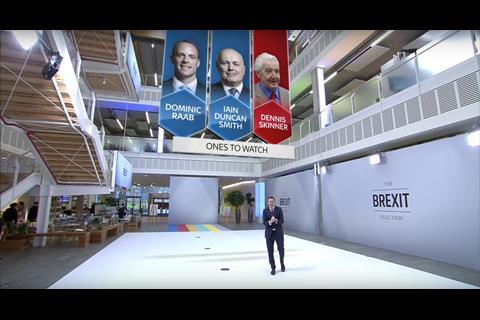 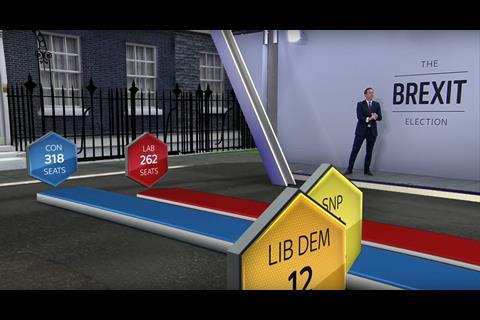 Sky News is enhancing its general election coverage – live from the Sky Central campus - with a series of advanced augmented reality (AR) graphics, including an eye-catching ‘race to Downing Street’ graphic. It has also installed a Spidercam wire-cam inside the building to offer sweeping aerial footage with integrated AR graphics, providing sports-style imagery for the news programming.

The AR graphics include the Downing Street graphic; a data-fed 3D AR map of all constituencies; a ‘coalition builder’ graphic; an AR exit poll display; and AR banner displays of the leaders and ’ones to watch’ that scroll down from the ceiling.

Election night director Ben Wickham told Broadcast: “The Sky Innovation Team have integrated the vision of sports productions with the editorial rigour of news and given us a fresh perspective, pushing the election coverage to new heights, both creatively and literally. As news, we understand the editorial bit of it, but we wanted to see it from the angle of flying cameras, technocranes and things; giving it that texture you wouldn’t normally see on an election show.”

“We wanted to bring in a wire-cam, as people will have seen wire camera shots in premium big-ticket sports events, but not on news programmes,” says Wickham. “However, there are very small tolerances for getting one in, and, even in the vast space of the Sky Central campus building where we’re hosting our election coverage we were within 20 centimetres of not being able to do it.”

Sky head of creative innovation Jason Landau added: “We didn’t really expect news to go this far, but they’ve embraced it all the way. Things like the race to Downing Street is really helping elevate Sky’s coverage of the election. We have a daytime and night-time version of all the effects, and we created a 360 image of the environment so, as the camera moves, you can get those reflections of the actual building which helps bed all the AR graphics in.”