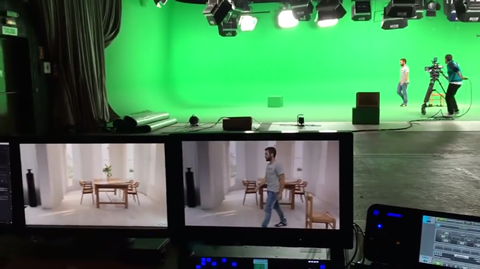 The system uses a VR games engine, which combines the foreground image, the CG background, the matte and the camera tracking data and feeds it to Nuke where the final composition is output.

The company, which specialises in digitally transforming film sets and has offices in the UK, Spain and Australia, believes it has created the first live VFX setup to combine game engine technology with live, high-end VFX and digital cameras to output live on-set visual effects.

It says it has had an “amazing response” to its demo of the system, as seen below. It can be built by On-set Facilities in any green-screen studio environment, with kit supplied and set up by the company on-set.

In a blog post, the company explains its tech breakthrough, saying: “So far, we have created a great tool for pre-visualisation and real-time VFX. It allows us to record live-action foregrounds in real-time, using real props and actors, and digitally bake them within HD, 2K, 360, and 3D virtual worlds.”

“The camera tracking information is captured along with zoom and focus data, and can then be passed directly to Nuke for on-set compositing or saved to be manipulated later.”

“We bake in Unreal Engine 4, comp in Nuke, and create 3D environments and animated characters and elements in 3D Studio Max. And some hardware is our own, as are the configuration tools and methods.”

Blackmagic Design’s Ultimatte 12 is used for the hardware keying.

The films below show the remarkable effects that can be achieved in real-time on-set using On-set Facilities’ system.

Real-time sweeping of the virtual set