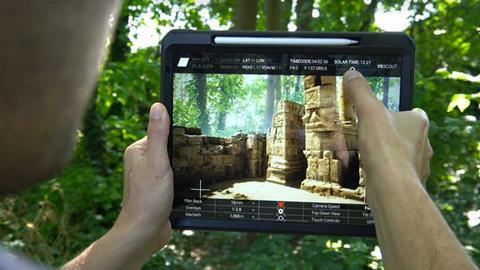 VSScout creates a photo-real CG model of any environment (indoors or outside), with real-time rendering using the Unreal game engine. It makes it possible to drop in assets and scrutinise any location to see if it would work for your shoot, including checking the position of the sun and how it casts shadows at different times of the day.

Day 1 LiDAR and high-res photogrammetry scans are taken from the ground and air to capture large areas in one day. Per day, an area of up to 4km2 can be captured in a rural location, or 0.5km2 in an urban setting.

Day 2 A capture of the area is provided, having been processed on-location. It’s a low-res model that can be accessed remotely by the production team anywhere in the world. A video of the area can also be live streamed from a drone. The client can make selects from the low-res model that, five days later, will then be available in full resolution

Day 7 A full Unreal Engine 4 scouting environment is available. In this, you can position cameras and test shots in real time, with varying focal lengths. You can also explore the lighting of the sun across the landscape at any time of the day.

The service works by the client first providing the details of the location they would like to be able to scout.

Visualskies then sends out a team of two to physically ‘scan’ and digitise the location, creating an accurate 3D model of the environment. This is then processed and rendered to enable the location to be accurately visualised and moved around in 3D space on an iPad.

The scanning process takes a day, with a base model ready for review by the client the following day. This initial model is then further refined, with a full-resolution photo-real CG asset ready within a week. The 360-degree model can be viewed from any angle, and at any time of the day on an iPad or in a VR device.

Visualskies co-owner Joe Steel said: “VSScout has been designed as a toolkit to aid the scouting and exploration of sites in a completely immersive manner. Allowing all involved to access locations remotely through our iOS app from the comfort of their own workplaces, minimising the need for travel and the expense that go with it, which in the current climate is a necessity. We’re enabling locations to be scouted and all logistics, camera shots and so on tested from home.”

Ross Dannmayr, co-owner of Visualskies, added: “The client draws a ring around the area they are interested in. We then spend one day on location, and within a week can turnaround what they need to properly investigate its possibilities as a shooting location. We do it all in-house – the scanning and processing, and the app has been created in-house too – and we offer everything as a service.”

Visualskies is currently working on a film for Paramount that is looking at 100 locations. For this, the company is initially digitising locations based on satellite imagery, rather than visiting all 100 sites. “This enables them to zero in on different parts so they know where to go to follow up by doing the full res scans,” says Dannmayr. 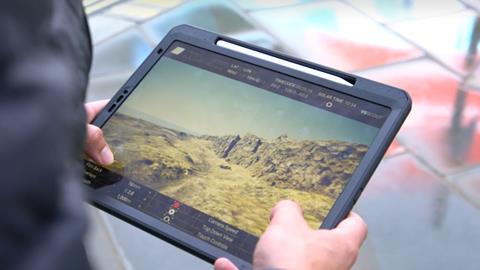