New IMAX screen in Manchester is the second biggest in Europe 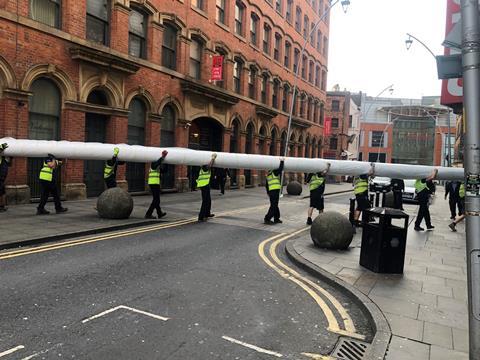 The new IMAX screen is the second biggest screen in Europe, featuring the latest laser technology.

The task of getting the 1000 kg giant screen safely delivered to the Vue Cinema was the responsibility of Cinelogic Digital, which has been contracted to install and fit a series of IMAX screens throughout the UK and Europe.

Cinelogic Director Andy Guthrie said: “Obviously, we had to ensure that it would be handled with extreme care. The results of any harm coming to the screen in-transit would have been catastrophic.”

The screen was delivered by Gallowglass, which deployed 52 crew to load-in speakers, projectors and other equipment as well as the IMAX screen itself.

The job took Gallowglass 1.5 hours. “The biggest challenge was carrying it up to the second floor, up flights of stairs, manoeuvring around pillars and tight corners,” he added.

The new screen launched in time for the second instalment of the Harry Potter prequel: Fantastic Beasts: The Crimes of Grindelwald.