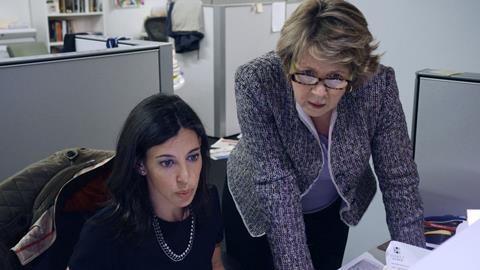 “One of the most fascinating and compelling documentaries I’ve seen in a long time. Even the veteran hacks were constantly amazed by the Alice In Wonderland nature of it all. But their hard work and dedication to getting the scoop while still keeping their coverage neutral and free from the vitriol routinely poured forth from the White House shone through.”
Jeff Robson, The i

“It can be difficult to wrestle political drama from a lot of footage of people talking on phones, but The Fourth Estate has more intrigue than most fictional newsrooms. A documentary revealing the quiet, thankless heroism of reporters is a necessary corrective in these dark days, but it is also clear the Times team is having a whale of a time.”
Tim Dowling, The Guardian

“The episode meandered at times and could easily have lost 15 minutes, but it was never not interesting, dispelling any romantic notions that newsrooms are still full of paper, noise, ringing phones and whisky tots.”
Carol Midgley, The Times

“Certainly, this opening episode was far from the greatest portrait of a newspaper ever made. But as a snapshot of how politics is evolving, of how Trump-style populism cynically sets out to erode public confidence in the media’s role as a holder-to-account of politicians and the powerful, it was breathtakingly effective in reminding us of the crucial role of a strong, free press in any truly democratic society.”
Gerard O’Donovan, The Telegraph

“No doubt, The Donald will watch this series and be delighted at the confusion and panic provoked by his style of government. He’ll see the political bias that he always insisted was there. But he will also see an organisation that is implacably intent on uncovering the truth about his alleged links to Russia. It will do it the old-fashioned way, with painstaking investigation and dogged fact-checking.”
Christopher Stevens, Daily Mail