TV Critics: Cider With Rosie; Downton Abbey; This Is England ’90

“If poetic ramblings were your thing, this was TV nirvana.” 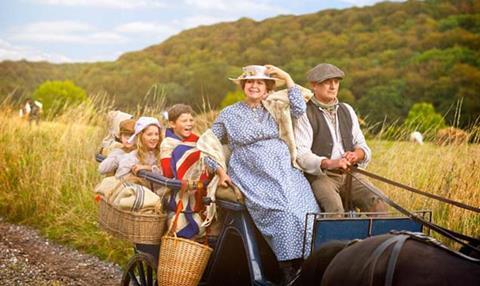 “This adaptation perfectly caught the tone: less sickly glass of Bulmers, more sweet, dark brew, clouded by the tragedies and everyday brutalities of its time. If poetic ramblings were your thing, this was TV nirvana.”
Ceri Radford, The Telegraph

“The scene was set for 90 minutes of undemanding viewing. Yet as the story progressed something altogether more interesting began to emerge. Just as the darkness in Lee’s novel is partially hidden by his gorgeous poetic writing, so too was this adaptation more than the initial sum of its parts.”
Sarah Hughes, The Independent

“Writer Ben Vanstone kept plotlines bubbling well and the director Philippa Lowthorpe nailed the misty countryside visuals. Not a perfect adaptation, but in terms of Sunday-night telly this was enough not just to warm cockles, but to spark off the odd surge of electric current.”
Andrew Billen, The Times

“Another Sunday, another adaptation of a classic of 20th century literature. They’ve been fabulous, though, and Cider With Rosie, the last, is no exception.”
Sam Wallaston, The Guardian

“Laurie’s Gloucestershire world seemed less like a sunny paradise, more like a place with its own rules. The centrepoint was his mother. I’m grateful to this latest remake for making me notice her.”
Matt Baylis, Daily Express

“Oh, Downton Abbey. Last week we had a scene where Lord Grantham met the new refrigerator; this week Mrs Patmore discussed the merits of experimenting with a newfangled jar of horseradish. Still, it remains a good romp.”
Andrew Billen, The Times

“Downton Abbey hit its comic stride with the second instalment of its final series. Everything bodes well for a series of romantic intrigue, blunders and wedding bells.”
Ceri Radford, The Telegraph

“Downton looks even sillier than it normally does – and further demonstrates that bonnet drama is better when it comes from books than when it makes itself up as it goes along. This hospital business is one of the most tedious storylines ever.”
Sam Wallaston, The Guardian

“It’s an extraordinary episode, that stays ringing in the ears after the credits have rolled and leaves you feeling numb and drained. But – and this is the beauty of This Is England – even among all those tears and that misery, there is some tenderness and hope.”
Sam Wallaston, The Guardian

“This Is England ’90 turned the gloom and despair up to 11. Next week’s finale is unlikely to be pretty.”
Sarah Hughes, The Independent