“Just keep your seatbelt fastened for all that visual turbulence.” 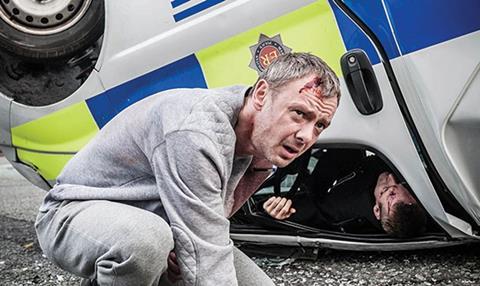 “One of my pet hates with TV dramas is when they throw so much information and so many names at you in the first 15 minutes that it fries your brain. Often the only way to make sense of it all is to rewind or watch again an hour later on the +1 channel. The show did just that and may well have lost viewers early on, which is a pity as episode one got much better the longer you stayed with it.”
Claudia Connell, Daily Mail

“Watching Prey felt like playing a video game through cataracts. Still, it’s worth tuning in for parts two and three, not to see if Marcus is guilty, but to see how guilty those around him are. It may prove as compelling a palette of greys as Line of Duty. Just keep your seatbelt fastened for all that visual turbulence.”
Alex Hardy, The Times

“That’s not to say Prey isn’t fabulous. It is. Any lack of depth is made up for in pace; it’s a gripping, breathless, buttock-clenching chase, foot to the floor, blues and twos going. I’m there, to the end.”
Sam Wollaston, The Guardian

“The publicity photo for Prey, last night’s new three-part drama on ITV, showed him cowering behind a wall oozing blood, and this accurately set the tone for an unabated misery-fest of a programme. This was decent, dramatic stuff to wallow in if you feel like shutting the curtains on the spring sunshine in every conceivable way.”
Ceri Radford, The Telegraph

“This finale again contained more on the side of truth than big laughs. This finale was lighter in touch than some recent heavy-handed episodes. If this was the end of Rev, it was all in all a lovely send-off.”
Alex Hardy, The Times

“It may not be the most original, or roll-in-the-aisle-laughing hilarious (I was closer to tears in this one). But it’s touching and smart, very human and immensely likable. Amen.”
Sam Wollaston, The Guardian

“BBC4 uncharacteristically eschewed the subtitled version, which I thought was a pity. It will take more than atmosphere alone to sustain Hinterland during any prolonged run, and for all the subtitles and bleak beauty of The Killing and The Bridge, they did also involve complex plots. There can only be so many recluses being murdered in remote farmhouses before our interest wanes.”
Gerard Gilbert, The Independent

“I hoped last night’s programme might be sensitive and thought-provoking but, in the end, it was nothing more than cheap and crude titillation. Of course, no documentary about prostitution would be complete without Brooke ‘Belle de Jour’ Magnanti who parroted her usual guff about selling sex, even stating that it had been a ‘privilege’. The whole thing was grubby, crude and left me feeling like I was possessed by the spirit of Mary Whitehouse.”
Claudia Connell, Daily Mail