“This programme title might have struggled to meet the Trade Descriptions Act.” 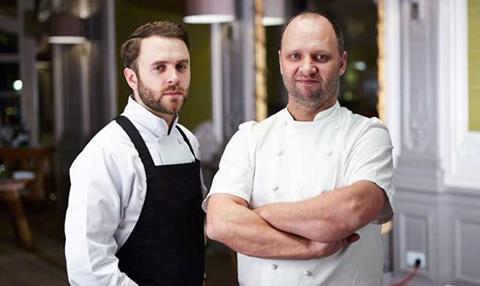 “Came billed as a death-match between two top chefs slugging it out to bring “fain daining” to the north-west. Much as I am normally up for anything with the hint of a competition, this programme title might have struggled to meet the Trade Descriptions Act. There was no obvious battle for Manchester going on between chefs Simon Rogan and Aiden Byrne, because the city is plenty big enough for both to succeed.”
John Crace, The Guardian

“This was a fun programme, loaded with culture clashes, big characters and even bigger dishes. However, I yearn for a third pretender in the Restaurant War: the plain-speaking doorman from the Midland, who should set up a van round the corner, peddling plates of his beloved cabbage and ribs. I hope to see him on next week’s episode.”
Alex Hardy, The Times

“The trouble was, not only did the menus look sick-making (raw ox meat? oysters fumigated in dry ice?) but the chefs, Simon Rogan and Aiden Byrne, were a pair of arrogant, sweary, pretentious pillocks and the only fair result would be to see both of them lose.”
Christopher Stevens, Daily Mail

The Wonder of Bees, BBC4

“The main drawback with bees on TV is that one bee really does look very much like another – even the experts sometimes struggle to pick out the queen unless someone has already thoughtfully covered her in red magic marker – which makes cute close-ups a bit of a non-starter. So inevitably a lot of the film was devoted to shots of people in protective suits either opening a hive or closing it. Beekeeping isn’t really much of a spectator sport.”
John Crace, The Guardian