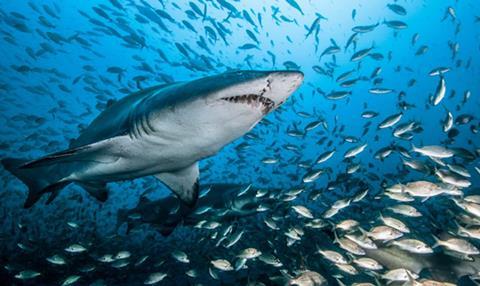 “All of the BBC’s superior natural history programming is fascinating, but Shark was also breathtakingly beautiful and, at times, genuinely terrifying.”
Ellen E Jones, The Independent

“These killers, the oceans’ ultimate predators for hundreds of millions of years, possess a terrible beauty that made hypnotic viewing in HD. It’s rare that TV delivers pictures we could never have imagined before, but the crew achieved it by enduring appalling conditions.”
Christopher Stevens, Daily Mail

“It’s some of the lesser known, fringe sharks, and their sinister behaviour, that make this programme so mesmerising. I like the sneaky snakey red-gilled frilled shark that lurks in the shadows and strikes like a cobra. OK, so maybe I don’t actually like it, but I like watching it, in a slightly worrying, pervy kind of way.”
Sam Wollaston, The Guardian

“Paul McGann’s meek delivery felt in stark contrast to the thrashing, primeval nature of a great white. Still, it goes without saying that the NHU – who spent a total of 2,646 hours underwater – have conjured something beautiful here.”
Patrick Smith, The Telegraph

“The BBC’s natural history unit is terrific when it goes in for the kill. Shark was, of course, a fest of deadly. I warn you, do not be an anchovy when a blacktip shark is near.”
Andrew Billen, The Times

“There was a plankton-sized amount of macho shark-action stuff in last night’s programme but otherwise it offered an entirely unexpected view of the creatures. Watching the tiny epaulette shark use its fins as legs, we felt as if we’d been granted access to the dawn of evolution itself.”
Matt Baylis, Daily Express

“Watchdog at 30 made the ever so slightly hyperbolic case that this consumer rights programme is the most important people-power innovation since the ballot box. It consisted of a rundown of the show’s greatest hits while past presenters reminisced about their favourite campaigns. Some were ground-breaking, others less so, but all were pursued with the same clear-eyed zeal.”
Ellen E Jones, The Independent

“Emma Jay’s celebration was a delight for lovers of old graphics and old fashions and just indiscreet enough not to be sycophantic. My five stars, however, are for Watchdog itself. Bravo.”
Andrew Billen, The Times

“The courtship scene between Bobby and Wendy was a masterpiece of awkward Britishness. Paul Ritter’s performance is far too brilliant to be wasted on a goodie. All pursed lips and public school bon mots, Bobby might try to project an image of affable silliness but underneath there’s a rogue’s heart, mark my words.”
Chris Bennion, The Independent

“A quick round-up of next week’s highlights followed before the final credits. These high-speed summaries were at odds with the slow, ominous atmosphere, so much so that they wrecked the whole mood and revealed what a slice of gammy old horseflesh The Game really was.”
Christopher Stevens, Daily Mail

“It is still very watchable but it is struggling to find the right tone. Last night’s episode of the Seventies-set thriller at several points descended into cruel comedy.”
Matt Baylis, Daily Express