TV Critics: Strictly Come Dancing; The X Factor; The Young Montalbano; The Story of the Jews; What Remains 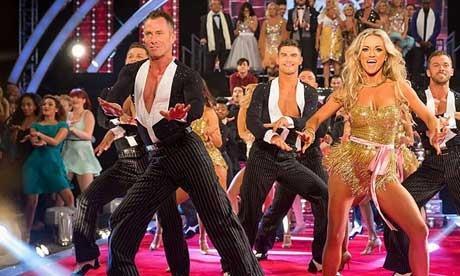 “For the average viewer, it makes not a jot of difference whether Chalky from Waterloo Road dances with Iveta or Anya; Countdown’s Rachel with Artem or Pascha… Which makes the whole of this launch show, a couple of weeks before the action proper, a bit of a waste of time. The only fun bit comes right at the very end, with our celebrities’ first attempt at a dance.”
Sam Wollaston, The Guardian

“The 15-strong line-up is too reliant on jobbing TV actors, in-house BBC talent and has-beens who mean little to viewers under 40… But Strictly showed it still has the power to attract big musical guests, with strong performances from Jessie J and Rod Stewart. Strictly remains endearingly old-fashioned, immensely likeable and reassuringly warm viewing.”
Michael Hogan, The Telegraph

“The show is beginning to feel as old as Forsyth himself. He is remarkable, but even the autocue now seems beyond him. He reads his almost-jokes off cards. Brucie said, or read, that this year the show was bigger than ever. I’d say the famous names were smaller than usual.”
Andrew Billen, The Times

“The ‘double auditions’ format – in the room Saturday, in the arena Sunday – seems to be bringing out the love in the judges, turning the spotlight away from the awful grind of thousands of no-hopers desperately trying their luck. The result is more Aw-factor than X-factor… It was ‘angelic’ 18-year-old Abi Alton who best represented the soppy new X Factor mood. A geekish singer-songwriter ready-minted for the Zooey Deschanel demographic.”
Gerard O’Donovan, The Telegraph

“It’s all very Italian, from the frequent sex scenes to the detailed descriptions of food, to the relaxed attitude to work… The niche appeal and subtitles might be a bit of a barrier, but by the end of the two-hour episode, I’d really warmed  to this compelling Italian. Riondino’s Montalbano could give Cumberbatch’s Sherlock a run for his money.”
Emily Jupp, The Independent

The Story of the Jews, BBC2

“You could hardly present a history of the Jewish people without passion coming into it and in this second instalment even the drier stuff of history, the scrolls and documents, somehow teemed with life.”
Matt Baylis, Daily Express

“As this gripping, unsettling story develops, the supernatural gives way to the nastiness of real people in the real world. In fact, apart from retired detective Len Harper (David Thelfall) it’s becoming hard to find a character who isn’t quite dreadful.”
Matt Baylis, Daily Express