“This season, the series lacks an obvious raison d’être.” Read on for the verdict on last night’s TV. 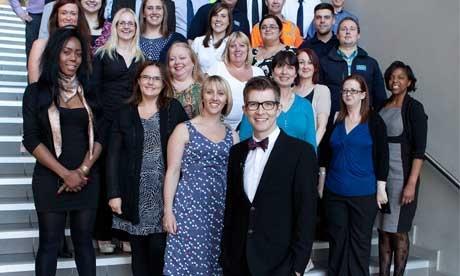 “There’s something slightly annoying about Gareth Malone. I’m thinking about the stripy cardigans, the bow ties, the braces, the sculpted hair, the fact that he calls himself Gareth Malone OBE on Twitter, the apparent lack of self-doubt, the relentless upbeat chirpiness – and the undeniable brilliance. Does he never lie in bed in the morning and think: I can’t be arsed today?”
Sam Wollaston, The Guardian

“The problem with the new series of The Choir is that in the past Malone has led with the music and let the emotion flow from it and from the unlikelihood of schoolboys, sink estates and Army wives getting together to sing choral music. This season, however, the series, which will scratch workplace choirs in competition with one another, lacks an obvious raison d’être.”
Andrew Billen, The Times

“Edmund was cast in the role of ‘grit in the ointment’, after clashing very politely with Gareth over the mawkish qualities of REM’s Everybody Hurts… The important part of ‘shrinking violet who blossoms’, meanwhile, was played by Natalie… That was the essential narrative opposition, plus a bit of stuff about how atomised employees could be brought together by close harmony and learn to see each other as human beings, rather than departmental representatives.”
Tom Sutcliffe, The Independent

“The Audience, which I was much taken with last week because it became emotional almost despite itself, and deliberately, I thought, chose a low key dilemma to explore, edged a little nearer to exploitation yesterday.”
Andrew Billen, The Times

“The Audience taps into the universal human desire to eavesdrop on other people’s woes… The novelty couldn’t disguise the fact that in my opinion Andreena’s dilemma felt a bit contrived.”
Matt Baylis, Daily Express

“There was empathy in Making Faces, Channel 5’s new series about the maxillofacial department of a Birmingham hospital, though most of it came from the technicians who work with silicone rubber rather than a scalpel.”
Tom Sutcliffe, The Independent