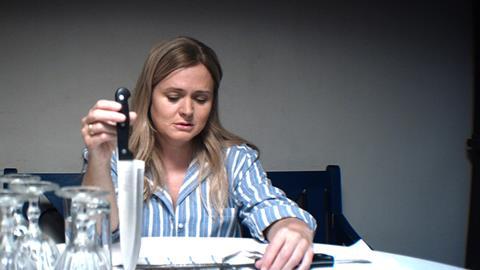 “This is not just speaking about Russia today, but about a woman’s story in extreme circumstances”

Cineflix Media senior vice-president of global scripted co-productions Julien Leroux first became aware of An Ordinary Woman at France’s Series Mania event earlier this year, where it was being showcased as the first Russian drama series to make the official selection and being compared to Breaking Bad and Happy Valley.

“It was intriguing,” says Leroux. “There are lots of good Russian drama series, but most are made for Russian audiences. This has a universal story that is not just speaking about Russia today but more about a woman’s story in extreme circumstances.”

Coming from director Boris Khlebnikov and a pair of Russian producers, the series follows a 39-year-old female florist named Marina, whose business is a front for her real work running a clandestine prostitution operation using her mobile phone and a WhatsApp group.

Her family are unaware of her true occupation but also have their own secrets: her husband is an adulterer, her eldest daughter skips school to deal drugs and her youngest is a sociopath. The action unfolds as her carefully constructed house of cards begins to collapse after one of her ‘girls’ is found dead.

The set-up has led to the Breaking Bad comparisons, but Leroux says the tone and pacing is more akin to the Sarah Lancashire-fronted BBC1 cop drama Happy Valley.

“It’s a very good reference point,” he says, adding that there are elements of dark comedy and family drama that sit alongside the core crime story.

Leroux points to the central performance of lead Anna Mikhalkova, who won the coveted Best Actress Award at Series Mania, with her portrayal of Marina described by judges as a “sensitive and nuanced performance of a strong woman who constantly has to repress her most private feelings to survive in a corrupted society”.

With an increasing number of international channels and on-demand services experimenting with a widening pool of foreign-language dramas, Cineflix Rights will be pushing the series hard in Cannes. It has acquired full international rights, promoting it as Russian network TV3’s first big internationally saleable series.

Though Russia is better known for importing and remaking Western dramas such as The Bridge for its TV channels, Leroux will explore format deals for the serialised, eight-part series.