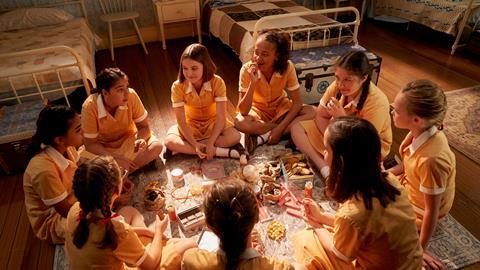 A drama without laptops or mobile phones is a rarity in a tween scripted series and Josh Scherba, president of distributor WildBrain, says the highlight of its slate this year is an almost alien concept to contemporary kids.

Malory Towers is based on Enid Blyton’s bestselling book series set in a girl’s boarding school and will retain its 1940s period setting.

With exteriors filmed in the UK and interiors shot in Toronto, the story follows 12-year-old Darrell Rivers as she leaves home for the first time for Malory Towers, on the sun-drenched cliffs of Cornwall.

Scherba says that while the series has a “nostalgic element”, it also covers “universal experiences like bullying, crushes and self-doubt, which are more relevant than ever to a young audience”.

Aimed at six to 12 year-olds, the series is skewed towards girls and aims to be both aspirational and inspirational, with the young pupils looking out for each other like a family.

The official Canada-UK treaty co-production began when WildBrain was approached in 2018 by King Bert, which was set up in 2014 by bestselling children’s author David Walliams, comedian Miranda Hart and Absolutely Fabulous producer Jo Sargent. Scherba says hit period drama Downton Abbey was a major point of reference during development.

The series was commissioned by CBBC in the UK and Scherba anticipates interest from other public broadcasters around the world, but also expects to get the attention of streaming services looking to differentiate themselves in a crowded market.

“You don’t see a lot of period pieces for kids and this is a series with a real cinematic feel, which will resonate with these new streaming services,” he adds.

Malory Towers will be directed by Rebecca Rycroft (The Evermoor Chronicles) and Bruce McDonald (Creeped Out; Dark Matter). Lead writers are Rachel Flowerday and Sasha Hails, who previously worked together on BBC mystery drama The Moonstone.

WildBrain will have a trailer, scripts for all 13 episodes and a bible to show buyers, and expects completed episodes before the end of the year. The series will debut on CBBC in the UK and the Family Channel in Canada in 2020.