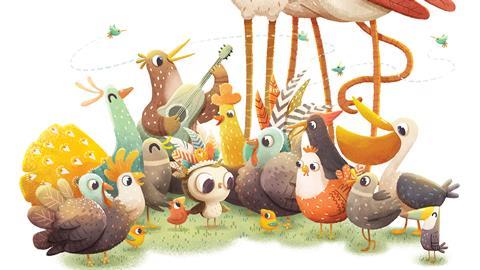 ‘There’s nothing in Odo’s personality that says boy or girl, so we’ve told all buyers and broadcasters they can dub the voice as they want’

On one level, Odo is an animated comedy series for pre-schoolers about a little owl who believes he can do anything, but the underlying ambition of the series is to tackle the growing mental health issues suffered by children.

“When we started to develop Odo, the levels of anxiety and depression in kids were eight times higher than they were 50 years go,” says Colin Williams, founder and creative director at Northern Ireland’s Sixteen South.

“This is a show that will aim to teach children to believe in themselves as self-belief is a trait that has been found to reduce stress and lower vulnerability to depression.”

Each episode will centre on the daily antics of the owl, who goes to Forest Camp – essentially a school for a wide variety of birds – and gets up to mischief with best friend Doodle.

Although the other birds see Odo as insignificant, his self-belief helps him achieve great things, even if it gets him into trouble along the way. Based on artwork by Alena Tkach from a book by Oliver Austria, the show is hand-drawn and created in 2D, with special 3D lighting and shading used to add depth.

Aimed at children aged three to five, the series was created and written by Williams and Sam Barlow.

Sixteen South will handle show-running, editorial, voice casting and post-production, while the design and animation will take place at Poland’s Letko, which has credits including feature film Moomins And The Winter Wonderland.

Williams highlights that the series is gender neutral. “There’s nothing in Odo’s personality that says boy or girl, so we’ve told all buyers and broadcasters they can dub the voice as they want,” says Williams, whose Sixteen South Rights is also handling distribution.

“We know that one broadcaster will rename the character Oda, as they need a show with a female lead.”

Pre-sales for the series have already been secured in more than 20 countries but Williams is looking to close additional key territories at Mipcom. A trailer, the first episode, three scripts and a show bible are available, and Williams hopes production will begin by the end of the year, when casting will take place.

Sixteen South’s credits include Claude, which ranks as one of Disney Junior’s highest-rated shows, and Lily’s Driftwood Bay, which airs in 125 territories around the world.