1
Hot Picks: Blue’s Clues And You! 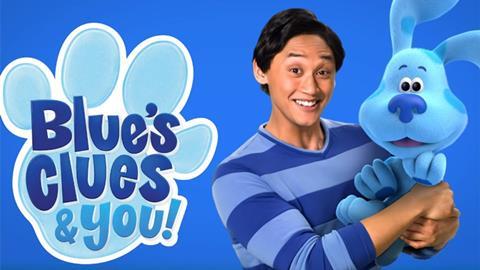 Hot Picks: Blue’s Clues And You!

More than 20 years after first appearing on Nickelodeon, Blue the dog is back for a new live-action series.

Blue’s Clues & You! is a reimagination of the iconic interactive show, first created in 1996 as Blue’s Clues, which ran for six series and rated strongly across Nickelodeon channels around the world.

Aimed at pre-school boys and girls, and hosted by newcomer Joshua Dela Cruz, each half-hour episode follows the adventures of Blue and Josh in a clue-led adventure.

“The original Blue’s Clues was one of the most successful preschool shows of all time,” says Lauren Marriott, vice-president of international programme sales at Viacom International Studios. “The updated version will hopefully continue that trend.”

With a refreshed look and new CG-animated characters, Blue’s Clues creators Traci Paige Johnson and Angela C Santomero have returned to help with the development of the new series. Original Blue’s Clues stars Steve Burns (Steve) and Donovan Patton (Joe) will also reprise their roles for the series premiere.

Playalong videos, which will launch on Noggin – Nick’s interactive learning platform for pre-schoolers – will deliver extra interactivity and allow kids to engage with Josh and the animated characters. The Nick Jr app will also feature original short-form content and full-length episodes.

“Kids enjoy the feeling of accomplishment when they solve the daily puzzle alongside their new friends,” says Marriott.

As the programme rolls out internationally, there are plans to introduce local hosts in a bid to add an even greater level of inclusiveness and broaden its appeal.

At Mip Junior and beyond, Marriott anticipates interest from OTT partners that are serving the pre-school market, building on existing partnerships with free-to-air channels with pre-school blocks.

The show will debut on 11 November in the US and will roll out internationally in 2020.