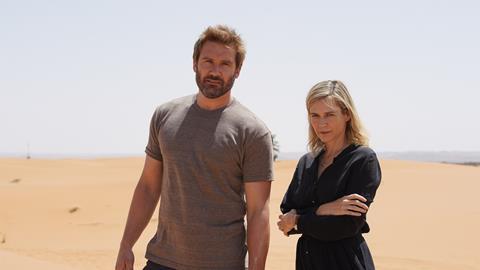 Last year, three European broadcasters came together to forge an international drama co-pro pact to fight off heightened competition and super-inflation driven by Netflix and Amazon.

Lincoln TV and Connect 3 Media’s Mirage is the first fruits of this pact, with two Alliance members – France Télévisions and Germany’s ZDF – involved alongside Canadian broadcasters Super Channel and Bell Media. The third member, Italy’s Rai, is not involved.

Distributor Cineflix Rights is intrigued as to the opportunities offered by this innovative grouping. “In what is becoming a post-Netflix environment, it’s great to see the aftermath of the earthquake that has been created in the TV landscape,” says Julien Leroux, senior vice-president of global scripted co-productions at parent company Cineflix Media.

“The Alliance is doing what these broadcasters wouldn’t necessarily do by themselves for an international audience. This is about coming together and creating shows for a younger audience that can play out on many platforms.”

Mirage’s financing has been innovative, with Cineflix on board from an early stage and Canadian tax credits helping to fund the ¤2.2m (£2m)-per-hour series. Airing in spring 2020, the six-part spy thriller follows Claire, played by Jack Ryan’s Marie-Josée Croze, an expat starting a new life in Abu Dhabi with new husband Lukas.

She is thrust into the shadowy world of espionage when former husband Gabriel (Clive Standen) comes back into her life – 15 years after she believed he was murdered.

“Clive is recognisable from Vikings and is huge in many territories and, although Marie is less well-known internationally, she carries the series,” says Leroux, who compares the characters’ sparky relationship to that of Elizabeth and Philip in FX’s The Americans.

Leroux believes the show – shot mostly in Abu Dhabi – stands out in the Cineflix catalogue due to its “hyper-exotic” nature.

While Cineflix is not targeting particular territories, Leroux hopes broadcasters around the world will snap it up with a view to offering it as a bingeable box set on their VoD players.

“Traditional linear broadcasters are turning to VoD and playing with windowing more and more,” he adds.