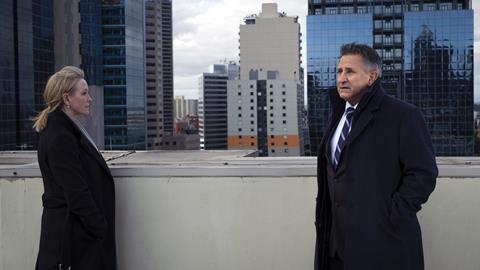 ‘We’ve very much made this with streaming in mind. Audiences want the opportunity to binge six, eight or 10 episodes’

The creators and stars of lauded 1990s Australian TV drama franchise Halifax have updated the show for the streaming age and Retribution is the result.

Late last year, Channel Nine revealed it would be returning to the show that spawned 21 TV movies between 1994 and 2002, attracting a cult audience and a large international following in what was a very different landscape.

Halifax creator Roger Simpson tells Broadcast that Nine had been eager to reboot the show for some time but he only got back on board with the idea once he had been assured the team could move past the “old TV movie concept”.

“When they responded to the fact that we could reconfigure it as an eight-part serialised story, it was like making a new show,” he adds. “We had the same character but a whole new format – much more modern and relevant. This is an opportunity for a proper storyline, relationships and regular characters.”

Exploring forensic psychiatry professor Jane Halifax’s character across eight parts of the Melbourne-based thriller has allowed for continuity and the ability to delve much deeper into the lead’s psyche and personal life.

In the show, Halifax hasn’t worked on the frontline for years when she is approached by the head of taskforce Stingray, played by Anthony LaPaglia, to help find a sniper who leaves no trace and is terrorising the city.

Having not worked in the field for more than 20 years, Halifax embarks on what becomes a personal journey, for which she will be forced to go back into the files and confront the nightmares of her past.

Lead actor Rebecca Gibney acted as consultant on the original TV movies but has taken on an executive producer role for the reboot.

“Back then, I was much younger and I was keen to come back on board to revisit a character as another woman with far more experience,” she says. “In the 21 TV movies, we got a glimpse of Jane’s private life but she was a single woman forging ahead in a male-dominated world – we didn’t get to find out much about her personally.”

Gibney is hopeful Retribution can find a new audience as it has been given more of an international flavour. “Fans of the original will certainly tune in, but the whole aim of this was to hand it international scale,” she adds. “Melbourne has become a character in the series and it has been shot in a specific way that we haven’t seen before.”

Simpson is already mulling over ideas for second and third runs and believes he could, for the first time, move Jane Halifax away from Melbourne.

He would love to see the series on an SVoD platform and believes it would work perfectly as a binge watch. “We’ve very much made this with streaming in mind. Audiences want the opportunity to binge six, eight or 10 episodes,” he adds.

Beyond Distribution head of sales Munia Kanna-Konsek says Gibney’s creation of Australian Netflix thriller Wanted, in which she also starred, means she is recognisable and will make the show attractive to the SVoD market. Gibney stars alongside another recognisable face, Without A Trace and Frasier’s LaPaglia.

Beyond can also build on its past international success to sell to more traditional broadcasters. “Having that background with the TV movies lends it weight,” says Kanna-Konsek.

Halifax: Retribution will be handed a soft launch at Mipcom and will air early in the new year on Channel Nine before being handed a window on Australian SVoD Stan.